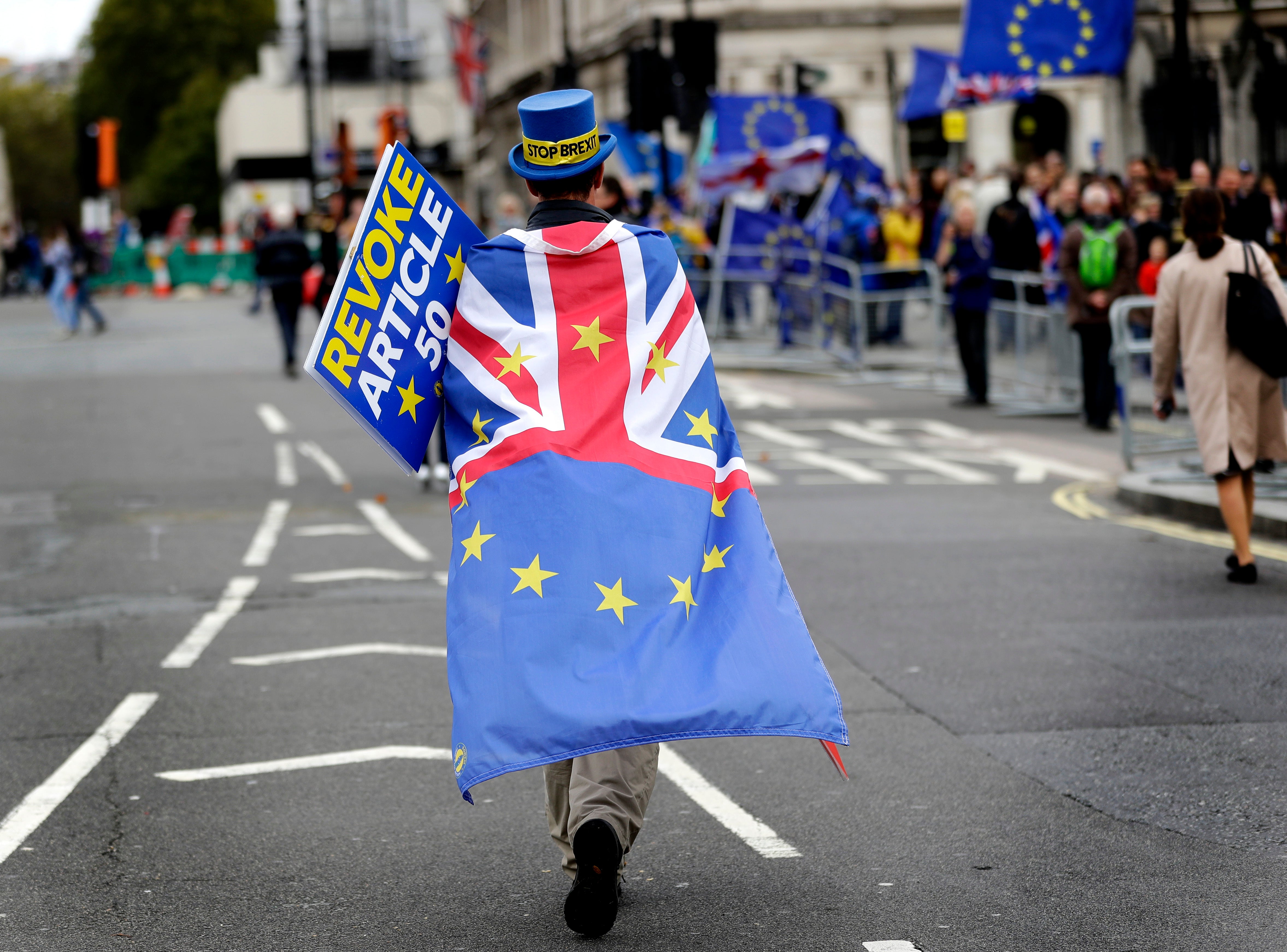 Anti-Brexit campaigner Steve Bray walks near Parliament in London, Tuesday, Oct. 8, 2019. The British government said Tuesday that the chances of a Brexit deal with the European Union were fading fast, as the two sides remained unwilling to shift from their entrenched positions. (AP Photo/Kirsty Wigglesworth)
by:
Posted: Oct 8, 2019 / 08:52 AM EST / Updated: Oct 8, 2019 / 08:52 AM EST

LONDON (AP) — Britain and the European Union traded bad-tempered barbs Tuesday as the chances of a Brexit deal appeared to fade, with just over three weeks until the U.K.’s scheduled departure from the bloc.

Johnson’s office gave a gloomy assessment after a call between Johnson and German Chancellor Angela Merkel on Tuesday morning.

In a statement to British media, Downing St. said Merkel had told the prime minister that “a deal is overwhelmingly unlikely” unless Northern Ireland remains in a customs union with the EU — something the U.K. says it can’t allow.

Downing St. said that “if this represents a new established position, then it means a deal is essentially impossible not just now but ever.”

The German government confirmed that Merkel and Johnson had spoken by phone on Tuesday. It didn’t comment on the substance of the discussion, saying in an emailed response to a query that “as usual, we are not reporting on such confidential conversations.”

The EU denied its position had changed. European Commission spokeswoman Mina Andreeva said “the EU position has not changed. We want a deal. We are working for a deal with the U.K.”

“At stake is the future of Europe and the UK as well as the security and interests of our people,” he said, addressing Johnson. “You don’t want a deal, you don’t want an extension, you don’t want to revoke, quo vadis?” — a Latin phrase meaning “where are you going?”

Irish Deputy Prime Minister Simon Coveney tweeted that it was “hard to disagree” with Tusk’s statement, saying it reflected “frustration across EU and the enormity of what’s at stake for us all.”

EU leaders have demanded more “realism” from Britain in response to a Brexit plan proposed by Johnson. The bloc says the proposals don’t fulfil the U.K.’s commitment to a frictionless border between Northern Ireland and EU member Ireland.

Johnson, meanwhile, has urged the bloc to compromise.

French President Emmanuel Macron has said the EU will assess by Friday whether a deal is possible.

Johnson’s opponents in Britain accused the government of deliberately undermining the Brexit talks. Keir Starmer, Brexit spokesman for the main opposition Labour Party, said the Downing St. statement was “yet another cynical attempt by No. 10 to sabotage the negotiations.”

“Boris Johnson will never take responsibility for his own failure to put forward a credible deal. His strategy from day one has been for a no-deal Brexit,” he said.

Scottish First Minister Nicola Sturgeon, who opposes Brexit, tweeted: “The UK government’s attempts to shift the blame for the Brexit fiasco to anyone but themselves – today it’s Merkel – is pathetically transparent.”

Johnson insists the U.K. will leave the EU on Oct. 31 even without a deal.

On Tuesday, Britain published more details of its plans for a no-deal Brexit, which the government says can minimize any economic shock from leaving without a deal.

Economists and major business groups warn that no amount of preparation can eliminate the pain of new barriers with the EU, which accounts for almost half of U.K. trade.

Many in the EU — and in Britain — are skeptical that Britain will leave the bloc on Oct. 31, because the U.K. Parliament has passed a law compelling the government to ask the EU for a delay to Brexit if no deal is agreed upon by Oct. 19.

Johnson says he will obey the law, but will not ask for a delay. It’s not clear how those two statements can bd reconciled — but it’s clear Johnson wants to pin the blame for any delay on Parliament and the EU, so that he can campaign as a champion of Brexit in a U.K. election that’s likely to be called soon.

The U.K. Parliament is set to be suspended later Tuesday so that a new session can begin next week with a major policy speech from Johnson’s Conservative government.

An earlier attempt by the government to shut down Parliament for five weeks was ruled illegal by the U.K. Supreme Court because it had the effect of preventing Parliament from scrutinizing the government’s Brexit plans. This week’s shorter suspension is more routine. Lawmakers will return on Monday for the State Opening of Parliament, which includes a speech delivered by Queen Elizabeth II outlining the government’s legislative plans.

But most of those plans may be halted by an early election. Both government and the opposition see a national vote as the only way to break Britain’s Brexit deadlock, though they disagree on the timing.