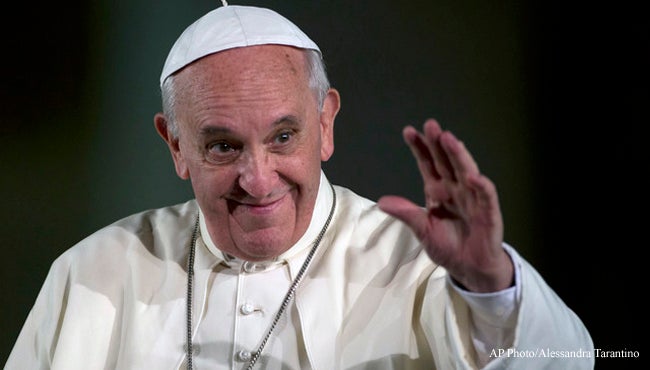 FILE - In this Saturday, Oct. 26, 2013 file photo, Pope Francis leaves after an audience with families in St. Peter's Square at the Vatican. The Vatican is taking the unusual step of conducting a worldwide survey on how parishes deal with sensitive issues such as birth control, divorce and gay marriage, seeking input ahead of a major meeting on the family that Pope Francis plans next year. The survey reflects the pope's pledges to move away from what he called a "Vatican-centric" approach toward one where local church leaders are more involved in decision-making. (AP Photo/Alessandra Tarantino, File)
by: Delia Gallagher, CNN
Posted: Nov 3, 2020 / 05:00 AM EST / Updated: Nov 3, 2020 / 05:01 AM EST

(CNN) — The Vatican has sought to clarify Pope Francis’ comments in support of same-sex civil unions, saying they were taken out of context and do not signal a change in doctrine.

In a letter sent on October 30 from the Vatican’s Secretariat of State to papal representatives (nuncios) around the world, the Vatican said that two comments made by Pope Francis in the film “Francesco” by Russian-born director Evgeny Afineevsky were taken out of context.

The Vatican’s letter was first published on the Facebook page of the Vatican nuncio to Mexico, Archbishop Franco Coppola, on Sunday.

A senior Vatican official has confirmed the letter’s authenticity to CNN.

“More than a year ago, during an interview, Pope Francis answered two different questions at two different times that, in the aforementioned documentary, were edited and published as a single answer without the proper contextualization, which has led to confusion,” the letter says.

Regarding the pope’s comments in the film that “what we need is a civil union law,” the Vatican’s clarification says that the Pope was speaking about his opposition to a same-sex marriage law in Argentina ten years ago when the Pope was Archbishop of Buenos Aires.

In that context, the Vatican’s letter claims, the Pope “had spoken about the rights of these people to have certain legal protection,” but not about same-sex marriage.

“It is clear that Pope Francis was referring to certain provisions made by states, and certainly not to the doctrine of the Church, which he has reaffirmed numerous times over the years,” the letter explains.

In the film the Pope also says: “Homosexuals have a right to be a part of the family. They’re children of God and have a right to a family,” which was interpreted by some to mean that the Pope was in favor of same-sex couples forming families.

The letter states that the Pope was speaking about the fact that “a son or daughter with a homosexual orientation should never be discriminated against within the family.”

Following the film’s premiere in Rome on October 21, Afineevsky told the Associated Press that he had personally interviewed the Pope for his documentary.

The film also explores the Pope’s work and views in other issues, including climate change, migration and economic equality, according to the film’s website.