Venice to bring back entry fee for daytrippers to combat overtourism 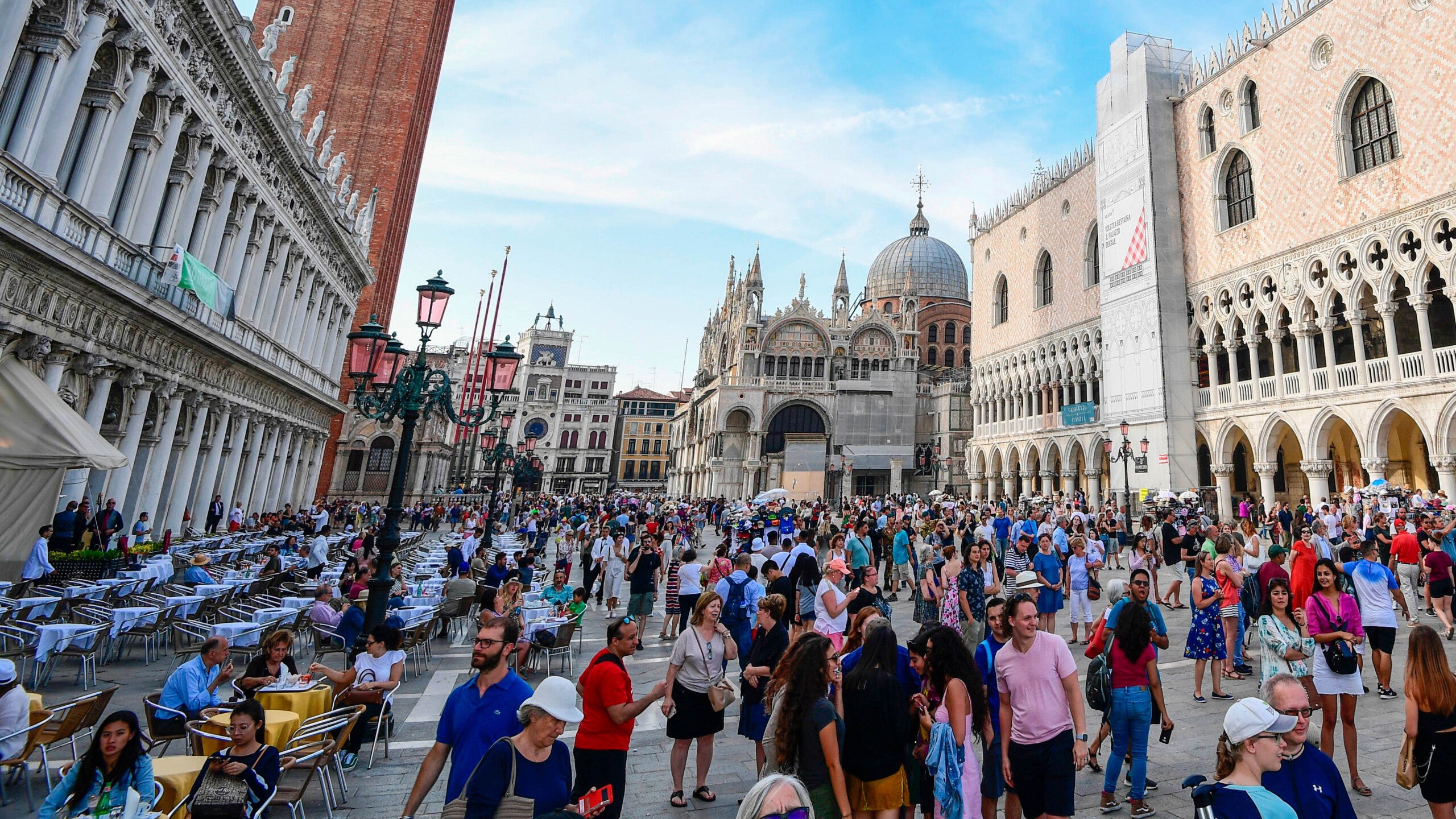 Tourists watch people (unseen) taking part in a demonstration in San Marco Square called by the No Great Ships movement against big cruise ships sailing into the Venice lagoon who arrived close to the San Marco square on June 8, 2019, in Venice. - On June 2, 2019 the MSC Opera cruise ship lost control and hit the River Countess tourist boat as it was coming into dock in Venice. (Photo by Miguel MEDINA / AFP) (Photo credit should read MIGUEL MEDINA/AFP/Getty Images via CNN)
by: CNN Staff Reports
Posted: Nov 20, 2020 / 07:47 AM EST / Updated: Nov 20, 2020 / 07:47 AM EST

(CNN) — With visitors swimming in the canals, sitting down in the middle of the street to eat, and even holding local workers hostage, Venice has become the poster child for tourists behaving badly.

So badly, in fact, and in such quantities, that the city had decided to start charging daytrippers an entry fee, in a bid to stop the “hit-and-run” tourism of up to 30 million people a year.

The fee system was due to be introduced this summer, but was postponed indefinitely thanks to the evisceration of Venice’s economy when visitor numbers plummeted because of the pandemic.

The city’s authorities have confirmed that the fee for anyone entering Venice without an overnight reservation will be launched on January 1, 2022.

“In light of the current situation around the Covid-19 pandemic, we have decided to make an important gesture regarding the optics of wanting to encourage the tourists’ return,” announced Michele Zuin, the councilor responsible for the economy.

The city — whose economy is largely based on tourism — has suffered hugely during the pandemic, with swathes of shops and restaurants closing. Locals are desperate for visitors to return — although many see this enforced pause as a chance to change tourism for the better.

The “contributo di accesso,” or access fee, will be priced according to how busy the city is in a bid to dissuade people from entering on peak days, thereby spreading them out throughout the season.

Official figures have not been confirmed for 2022, but for the scheduled implementation in 2020, it was planned to go up to a maximum of €10 ($12) on the very busiest days.

Visitors staying overnight in the city are exempt, a move to encourage people to spend the night, thereby putting more money into the economy.

Calling his announcement part of a plan to “relaunch the city’s economy,” Zuin said that the next 14 months will be spent developing the system that will allow people to reserve their slots ahead of time.

Valeria Duflot, co-founder of Venezia Autentica, an online platform encouraging sustainable tourism, said she was happy for the fee to be delayed, though urged the authorities to do more towards changing the kind of tourism in the city.

“Recovery is forecast to take several years… the situation is critical”, she told CNN.

“Many local businesses, though not directly related to tourism, were surviving thanks to tourism money.

“As the community desperately needs business, postponing a tax that was designed in the pre-pandemic time of overtourism, makes sense to us.

“However, this time should not be wasted. It’s important to change the city’s tourism strategy by working to make the industry less extractive. One priority is to ensure that a greater share of tourism revenue is spent at local businesses.”

Venice’s visitor numbers have become increasingly difficult for the city to handle.

And although some residents have protested at the erection of turnstiles separating locals and tourists on busy days, and have compared the ticketing system to turning the city into a theme park, mayor Luigi Brugnaro, who has spearheaded the plans, won re-election in September.

Around 70% of Venetian residents have left the city in the past 70 years — largely, it is thought, because of the economy turning towards tourism.