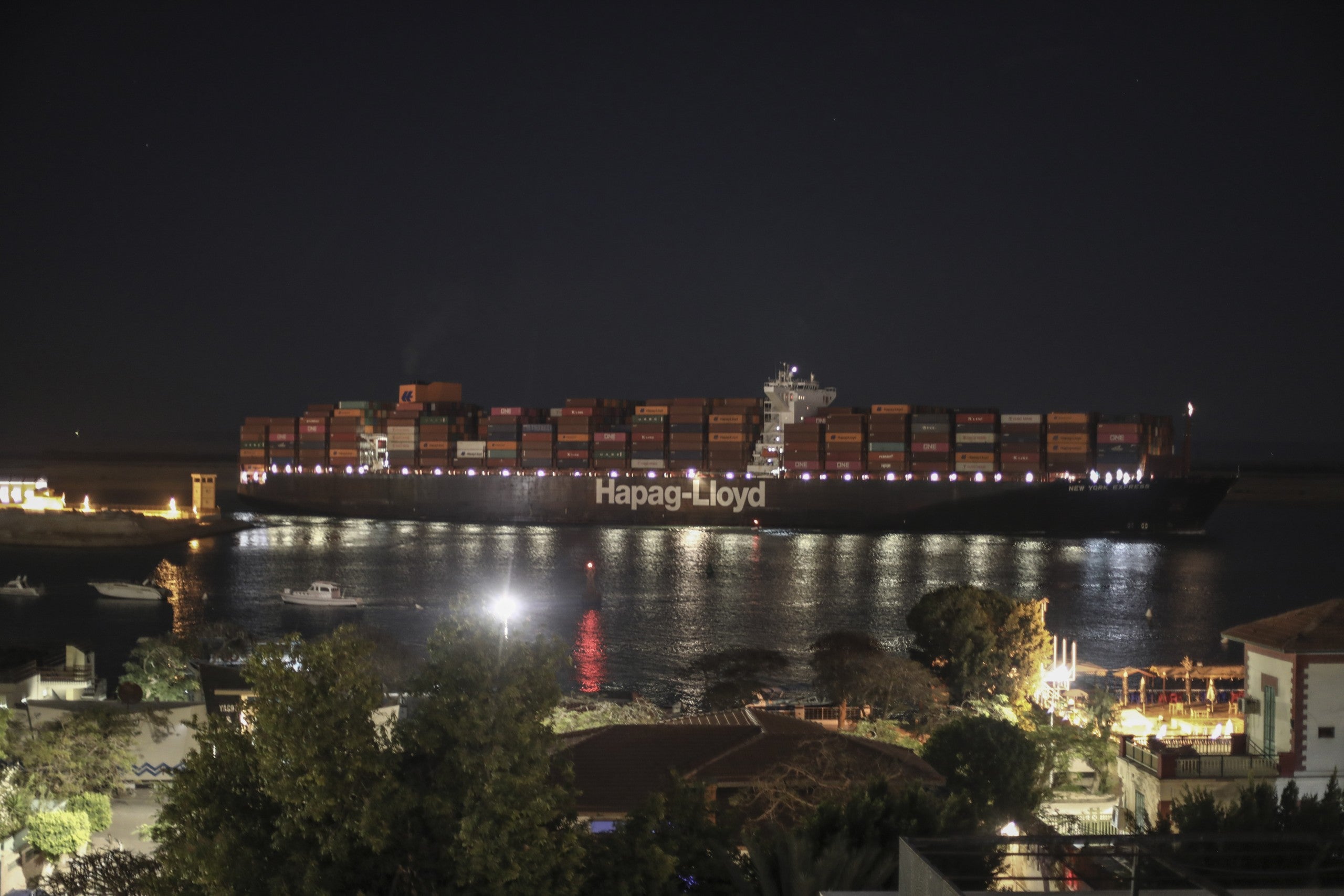 SUEZ, Egypt (AP) — Experts on Tuesday boarded the massive container ship that had blocked Egypt’s vital Suez Canal and disrupted global trade for nearly a week, seeking answers to a single question that could mean billions of dollars in legal implications: What went wrong?

As convoys of ships again began traveling in this artery linking East and West through the Mediterranean and Red Seas, hundreds more idled waiting for their turn in process that will take days. Egyptian government officials, insurers, shippers and others similarly waited for more details about what caused the skyscraper-sized Ever Given to become wedged across the canal’s southern single-lane on March 23.

When blame gets assigned, it could turn into years of litigation over the costs of repairing the ship, fixing the canal and reimbursing those who saw their cargo shipments disrupted. And with the vessel being owned by a Japanese firm, operated by a Taiwanese shipper, flagged in Panama and now stuck in Egypt, matters quickly become an international morass.

“This ship is a multinational conglomeration,” said Capt. John Konrad, the founder and CEO of the shipping news website gcaptain.com.

Experts boarded the Ever Given as it idled Tuesday in Egypt’s Great Bitter Lake, just north of the site where it previously blocked the canal. A senior canal pilot, speaking on condition of anonymity because he was not authorized to talk to journalists, told The Associated Press that experts were looking for signs of damage and trying to determine the cause of the vessel’s grounding.

Damage to the vessel could be structural, Konrad warned. Stuck for days across the canal, the ship’s middle rose and fell with the tide, bending up and down under the tremendous weight of some 20,000 containers across its 400-meter (quarter-mile) length. On Monday, when workers partially floated the ship, all that pressure came forward to its bow, which acted as a pivot point until the ship ultimately came free.

“Structural integrity is No. 1. You know, there was a lot of strain on that ship as it was sagging in the waterway,” Konrad said. “They have to check everything for cracks and particularly that rudder and the propeller in the back that’s connected to the engine room.”

“And then they have to go through all the mechanical equipment, make sure they test the engines, all the safety valves, all the equipment, and then determine that it’s safe to sail either by itself or with a tug escort to the next port,” he added.

As of Tuesday morning, more than 300 vessels carrying everything from crude oil to cattle were waiting on both ends of the Suez Canal and in the Great Bitter Lake for permission to continue sailing to their destinations, canal service provider Leth Agencies said.

The ship’s owner, the Japanese firm Shoei Kisen Kaisha Ltd., said Tuesday that it would be part of the investigation along with other parties, though it did not identify them by name. It also refused to discuss possible causes of the incident, including the ship’s speed and the high winds that buffeted it during a sandstorm, saying it cannot comment on an ongoing investigation. Initial reports also suggested a “blackout” struck the vessel, something denied by the ship’s technical manager.

The company added that any damage to the ship was believed to be mostly on its keel. It said it was not immediately known whether the vessel will be repaired on site in Egypt or elsewhere, or whether it will eventually head to its initial destination of Rotterdam. That is a decision to be made by its operator, rather than the shipowner, the company said.

The grounding of the ship had halted billions of dollars a day in maritime commerce. Those losses. as well as physical damage from the incident, likely will see lawsuits.

Shoei Kisen Kaisha Ltd. is covered with some $3 billion in liability insurance through 13 Protection & Indemnity Clubs. Those clubs are not-for-profit mutual insurers used by the vast majority of global shipping firms.

Global legal firm Clyde and Co. said the Ever Given’s owner likely would pay Egypt’s canal authority for the assistance already rendered to the vessel. The authority also could fine the Ever Given.

“We anticipate a detailed investigation will follow which will determine the cause,” the firm said. ”Evidently the cause will impact upon the legal liabilities of the ship and cargo interests.”

On Monday, a flotilla of tugboats, helped by the tides, wrenched the bulbous bow of Ever Given from the canal’s sandy bank, where it had been firmly lodged since March 23. The tugs blared their horns in jubilation as they guided the Ever Given through the water after days of futility that had captivated the world, drawing scrutiny and social media ridicule.

Analysts expect it could take at least another 10 days to clear the backlog on either end of the Suez Canal.

The Ever Given had crashed into a bank of a single-lane stretch of the canal about 6 kilometers (3.7 miles) north of the southern entrance, near the city of Suez. That forced some ships to take the long, alternate route around the Cape of Good Hope at Africa’s southern tip — a 5,000-kilometer (3,100-mile) detour that costs ships hundreds of thousands of dollars in fuel and other costs.

The unprecedented shutdown, which raised fears of extended delays, goods shortages and rising costs for consumers, has prompted new questions about the shipping industry, an on-demand supplier for a world under pressure from the coronavirus pandemic.