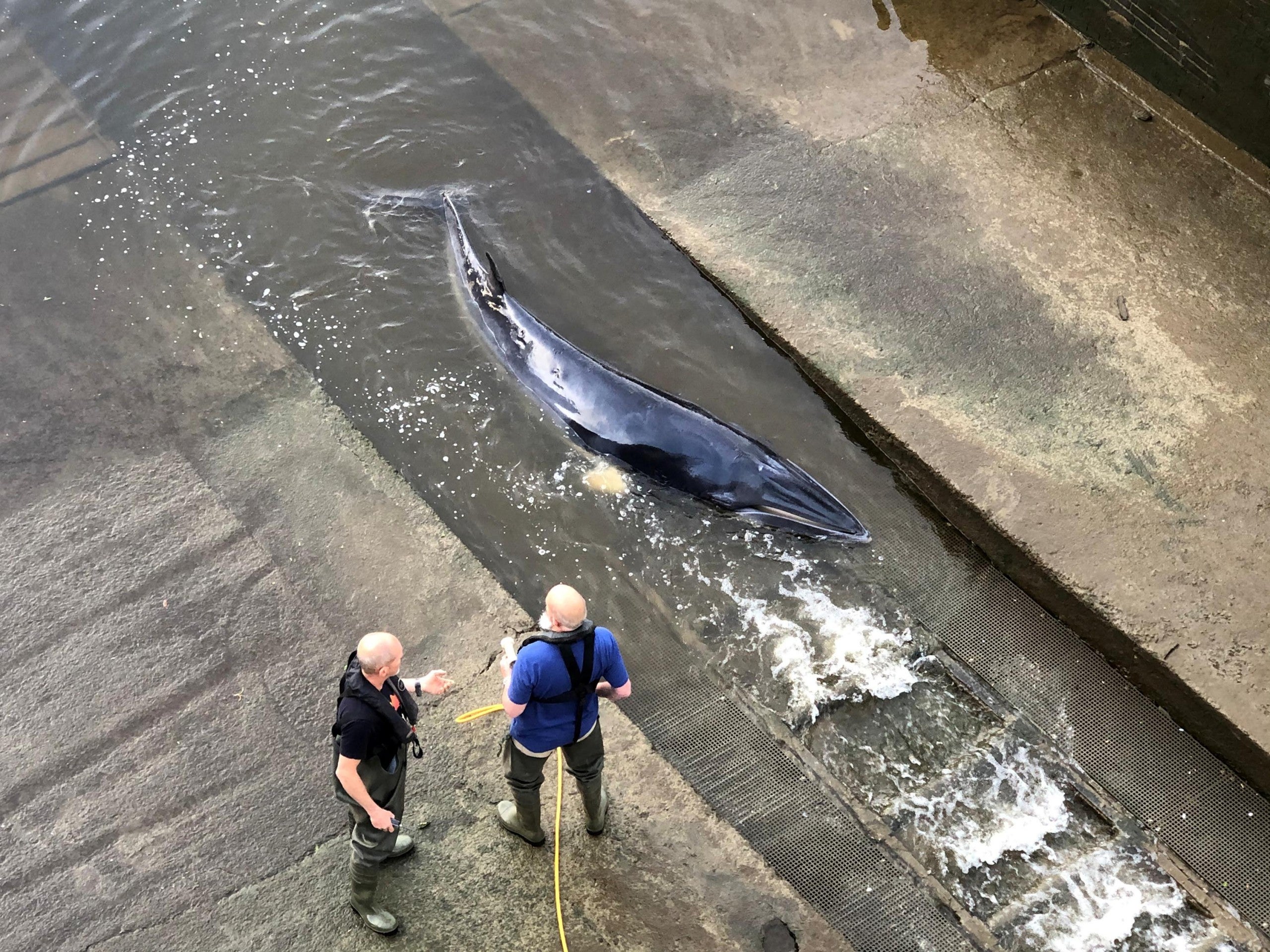 Rescue attempts are made as a small whale stranded in the River Thames is seen in this picture obtained from social media in London, Britain, May 9, 2021. DAVID KORSAKS @dkfitldn/via REUTERS THIS IMAGE HAS BEEN SUPPLIED BY A THIRD PARTY. MANDATORY CREDIT. NO RESALES. NO ARCHIVES. TPX IMAGES OF THE DAY
by: Rob Picheta, Mitchell McCluskey and Amanda Jackson, CNN
Posted: May 10, 2021 / 05:45 PM EST / Updated: May 10, 2021 / 05:46 PM EST

(CNN) — A young whale trapped in London’s River Thames was euthanized after becoming stranded for a second time on a river embankment Monday evening.

The minke whale’s condition had deteriorated throughout the day as it struggled in the unfamiliar environment, and it was “humanely put to sleep” by veterinary experts, the British Divers Marine Life Rescue said in a statement.

“Medics used inflatable pontoons to prevent the animal from slipping back into the river, which allowed the veterinary team from the Zoological Society of London to further assess the animal and end its suffering,” the statement read.

The whale had likely swum hundreds of miles before it was spotted around 7 p.m. local time on Sunday, stuck near Richmond Lock. Once freed, the whale slipped away under cover of darkness before rescuers could take further action, a spokesperson for the Port of London Authority told CNN.

The rescue team “managed to get a special inflatable pontoon around (the whale), and then floated it out onto the main river,” Port of London Authority spokesperson Martin Garside told CNN. “At that point, the whale made its own decision and swam from the pontoon into the main river.”

The whale was found again on Monday morning against the river wall, raising concerns it would become beached again.

The whale, estimated to be about 10 to 13 feet long, ended up far from its natural habitat. A post mortem examination will be carried out to try to establish how the whale came to be in “poor condition and lost in the river.”

“This species lives in the northern North Sea, so it’s very lost,” Garside said. “It’s a very young whale and it’s in a very dicey situation and its life is hanging in the balance.”

Minke whales can grow to weigh around 20,000 pounds and typically live for about 50 years, according to the United States’ National Oceanic and Atmospheric Administration.

Garside said his organization tends to whales in the Thames around once a year, but no whale had ever swum so far west up the Thames.

The rescue team included officers from the Port of London Authority, the Royal National Lifeboat Institution and the London Fire Brigade.

Spectator Daniel Magee, who recorded several videos of the whale, said he initially assumed it was a seal.

“As we got closer I saw a fin and realized it was a whale,” Magee told CNN on Sunday. “Some lock keepers hosing him down and it looked like the tide was going up so he could turn around. I realized that the whale might be injured as it started rolling on its side and thrashing about.”

Another spectator, David Korsaks, told CNN he was surprised to see anything other than birds in the area.

“It was almost disbelief and shock to see a whale where you would normally only see ducks and swans,” Korsaks said. “My next thoughts were I hope it’s ok and manages to swim free.”

Sophie Milner told CNN she took video of the whale after seeing people gathered at the scene.

“We just saw a crowd of people looking at the whale. It was being looked after by some specialists by the time we got there,” she said.

It is unusual, but not unprecedented, for whales to enter the Thames and require rescuing.

And in 2006, a bottlenose whale was spotted in central London, sparking a massive operation to return her to safety. Rescuers used a crane to lift her out of the river and onto a barge. But the whale died on the barge hours later, before it could be returned to deeper water.