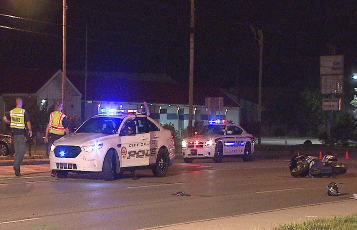 LAWRENCE, Ind. (WISH) — New video of a fatal hit-and-run has been obtained by Lawrence police investigators.

The new surveillance video shows a white SUV that is being sought after 25-year-old Jonathan Macklin was struck and killed on May 10 in the 8100 block of Pendleton Pike.

Police believe the SUV is a white early 2000s model Chevy Suburban. In the video investigators say the vehicle can be seen driving towards the exit of Esquire Plaza on to Pendleton Pike just before the crash.

The driver of the the SUV continues west on Pendleton Pike after the crash, police say.

Investigators say based on the new video the Chevy Suburban might be a former government or fleet-style vehicle. The crash may have caused damage to the driver side rear quarter panel, fender well area or tail light assembly areas.

A candlelight vigil planned by friends and family will take place on Thursday evening at 7:30 p.m. at the scene of the crash.

On 24-Hour News 8 at 5 and 6 p.m. Julian Grace spoke with Macklin’s family in hopes that the driver of the SUV will come forward.

Anyone with information should contact Crime Stoppers of Central Indiana at 317-262-TIPS.