Investigators: regulator was removed from gas system at Shirley’s home 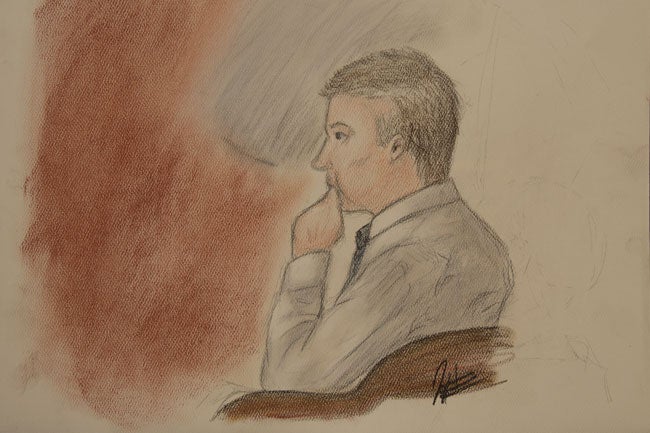 SOUTH BEND, Ind. (WISH) – 4:55 p.m. UPDATE: An investigator testified Wednesday that “anybody that understands a bit of plumbing” could remove a portion of a gas system, as they said it had been at the site of the Richmond Hill explosion.

Prosecutors are trying to prove that Mark Leonard’s girlfriend Monserrate Shirley’s home blew up, after it was filled with gas when a gas regulator and a valve from the gas fireplace were removed.

They say it was a microwave set to a timer that sparked the explosion.

The November 2012 blast in the Richmond Hill neighborhood killed Dion and Jennifer Longworth, and damaged or destroyed more than 80 homes.

Mark Leonard is among several, including his half brother and his girlfriend Monserrate Shirley, accused in connection to the case.

Leonard is currently on trial in St. Joseph County for murder, arson, insurance fraud and conspiracy.

Paul Puckett and Curtis Popp from Citizens Energy Group told jurors in conducting their investigation, they’d seen that the regulator to the gas system at the Shirley’s home had been replaced with hard piping.

A regulator on a gas system works to reduce the pressure of the gas coming to a home, so the home will have a safe gas pressure for its appliances.

Investigators testified that they found no problems with the gas system that is within Citizens Energy Group’s jurisdiction, or the lines outside the home.

Wednesday, jurors were schooled in natural gas, what it is, and how it typically travels through gas lines and a meter, into a home.

They saw pictures of the actual meter from Monserrate Shirley’s home. A representative from the Indiana Utility Regulatory Commission, Dan Novak, told jurors the Shirley’s meter was the only one of the four homes closest to the explosion, that didn’t receive much damage, and could be tested.

Novak showed jurors pictures that showed the gas regulator was missing from the Shirley’s meter. He also showed them a valve next to it was in an “on” position, meaning gas was flowing.

He then showed them a picture of the remaining part of the gas fireplace at the Shirley home – showing there should have been a shut-off valve, but that wasn’t there.

A juror asked a question through the judge – saying essentially – could anybody replace a regulator with piping?

Jurors also heard from a representative from the NTSB, who arrived on the scene in the days after the explosion.

He said he also found the source of the explosion was not in Citizens Energy Group’s jurisdiction.

Even before other investigators got up to testify, prosecutors taught jurors about natural gas and its properties.

Paul Puckett, with Citizens Energy, showed jurors a powerpoint consisting of information about natural gas. He also gave jurors cards to smell, showing them the difference in the smell of natural gas after they add an odor to it.

He used an actual gas meter assembled in the courtroom, to show how gas gets from the lines, to the meter, and into a home.

One video showed jurors more about the flammability of gas, a training exercise used by Citizens Energy in their training lab.

In the demonstration, jurors watched as the roof to a small, miniature home is ventilated, and then an ignition source is introduced. As the gas level inside the home starts to go down from 20-percent, jurors see a small fiery explosion inside the home, and the paper roof explodes upwards.

Prosecutors used another video prepared by Citizens Energy to show what a gas meter sounds like, when it is missing that Maxitrol regulator, which reduces the pressure of gas. Jurors were able to hear the difference in the sound that emanates when that regulator is removed. Without the regulator in place, jurors could hear a much louder hissing sound.

Neighbor Gloria Olvey testified Tuesday that she had heard a loud hissing sound the night before the explosion, coming from the Shirley’s gas meter.

Defense attorney Diane Black talked again about Garza’s testimony from Tuesday, about how he felt the explosion at his house on the south side: that his house shook. Garza said he thought a car ran into his home. He’d said Tuesday he ran outside and saw his neighbors outside as well, then grabbed his radio to find out this had happened not too far from his home.

“When your house shakes, and it’s not in your neighborhood or next door, you automatically think, this isn’t good,” Garza said.

He said on his way to the Richmond Hill neighborhood, he could see the glow in the distance of fire. He said it reminded him of New York on 9/11. He’d been a member of Indiana Task Force One at that time, and left for ground zero on Sept. 11, arriving there the next day to help.

Garza said once he arrived to the Richmond Hill neighborhood, he could see the debris and the Longworth’s home that had two-thirds of it missing. The remaining portion of the house was on fire when he got there. He said he saw a lot of cars in driveways and thought that this wasn’t going to have a good outcome.

Defense attorney Diane Black then started questioning Garza about his investigation technique and his experience.

Garza gave mostly yes or no answers to the questions.

Black asked him about the procedures they follow, how the fire and police departments rely on his results. She also said his origin and cause report “could mean somebody could be arrested for what occurred there.”

She also asked him about methods used, and asked him if he was familiar with “expectation bias.”

Discussions with the judge

Before the jury was brought out Wednesday, the judge and attorneys discussed several matters. The judge decided he would allow the jurors to have a trial notebook, or binder, containing photos of the evidence introduced by the prosecution. The defense objected to those binders.

Judge John Marnocha said he sees this trial broken up into essentially three portions. The first is the explosion and its results. The second, which we are in now, is the cause of the explosion. The third is proving Mark Leonard’s connection to this explosion.

We’ve also learned the prosecution won’t bring in all the large items of physical evidence they’ll use to prove this case into the courtroom. Instead, they’ll work to prove their case with photographs of the evidence when they can.

The trial in South Bend is expected to last four to six weeks.