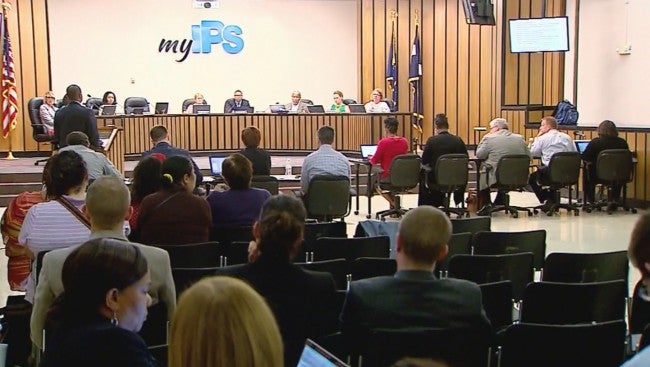 INDIANAPOLIS (WISH) — The Indianapolis Public Schools board is taking a step toward adding protections for its teachers.

This would come into effect if a teacher felt it necessary to break up a fight between students.

The board members discussed a new policy proposal in a meeting Tuesday night.

Right now, there currently is no policy protecting teachers legally if they tried to get involved in a student fight.

The superintendent hopes this new policy will send a clear message that the board stands behind teachers.

A fight caught on camera at Northwest High School got the attention of the community this month.

Part of the issue was that a nearby teacher didn’t feel they could physically intervene and be legally protected by the district.

But that could be different from now on if a new board proposal passes.

“We need a policy to ensure that we can create administrative guidelines and procedures around how staff is involved in terms of use of force,” IPS Superintendent Lewis Ferebee said

The new policy would allow use of limited force by staff members to prevent a student from injuring themselves or others, interfering with a school activity or education, or damaging property.

“That would depend on the situation or the student that’s involved, so that looks different for a six-year-old kindergartner than it does for a 16 year old,” Ferebee said

A former teacher and union member said she wants more clarification than what’s provided right now, but overall she supports the board if it passes the policy.

“I don’t want to sound skeptical but I just want to make sure that our teachers are gonna be protected,” Rhondalyn Cornett said.

Ferebee introduced the new policy he feels is necessary given ongoing safety concerns in IPS schools.

He said the Northwest High School fight spurred this action.

“There was a relationship. It forced us to look deeper into our policies,” he said. “I think this is a good time for us to ensure that there’s clarity that gives us guidance and gives staff guidance on how to handle those situations.”

They’re also looking for administrations to create their own guidelines for specific schools under this policy.

The board will vote on this Thursday night at its action session in order to go into effect as soon as possible.