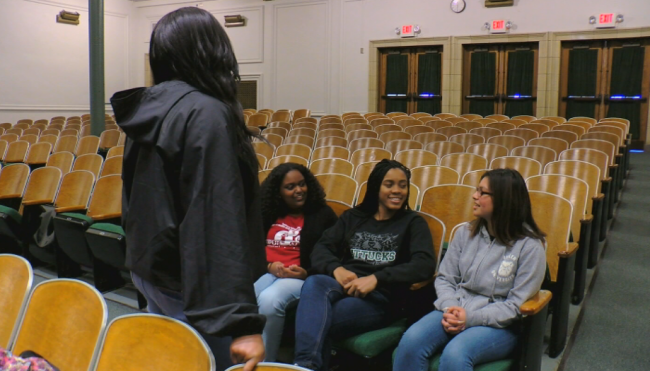 Free tickets to “A Moderated Conversation with Former First Lady Michelle Obama” were gifted to IPS high schools by the Women’s Fund of Central Indiana and distributed to select students on the basis of academic achievement, community involvement and other factors, according to administrators.

A group of Crispus Attucks High School students were giddy with excitement when school principal Lauren Franklin selected them to attend, calling it a “happy shock” and the “opportunity of a lifetime.”

“I even jumped up and hugged her,” said sophomore Feven Tekeste. “And I do not hug people.”

Tekeste, 16, considers the former first lady a role model and plans to pursue a career in law, she told 24-Hour News 8.

Finding a role model she could relate to gave her the courage to believe in herself, she explained, as well as the strength to speak out about sociopolitical issues she feels passionately about. Tekeste said she plans to ultimately work as a civil rights attorney.

Crispus Attucks senior Princess Davis, 19, also credits Obama as her inspiration to pursue a law degree. The cheerleader, basketball player and track runner currently serves as senior class president and the “voice of the school” heard during campus announcements. She said she approaches her extracurriculars with a heavy focus on community advocacy and balance; priorities also noted by Obama.

“I love everything I do but I make sure I have enough time for school and for myself,” said Davis. “When things get tough… I step back and remind myself what I’m doing it all for.”

Perseverance in the face of challenge is something fellow senior Maria De Leon, 18, is familiar with.

“I have parents who have limited education and didn’t grow up speaking English, so they’re not able to help me as they would like to,” she explained. “I had to seek opportunities for myself.”

De Leon excelled academically throughout high school and was recently announced as a Lilly Endowment Community Scholarship recipient. The award will cover her tuition when she enrolls at Butler University this fall. She plans to major in public relations and political science, she said, and will be the first in her family to attend college.

“Michelle Obama has been a role model for everyone,” said De Leon. “Not only the African American community but for other minorities as well.”

Sophomore Faith Harrington, 15, looks up to the former first lady for more than her success as a minority female. She also admires her for being a dedicated mother, loving wife and “scandal-free” politician, she told 24-Hour News 8.

“Her legacy is just being a true woman,” said Harrington. “She is everything.”