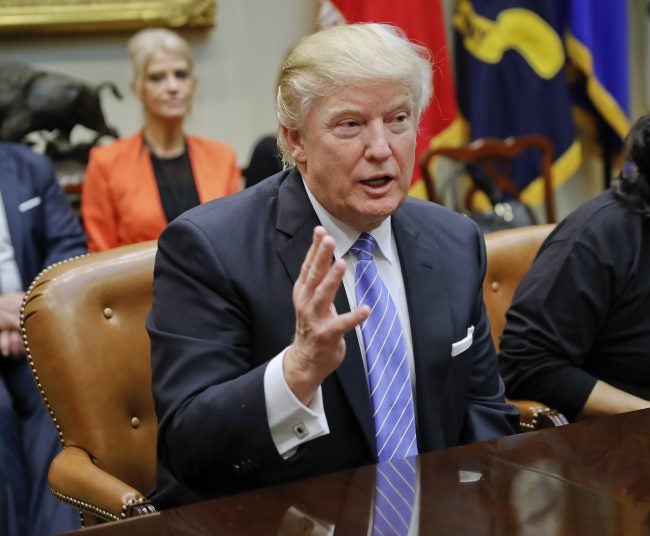 BAGHDAD (AP) – Iraqi lawmakers Monday called for banning Americans from entering the country after U.S. President Donald Trump signed an executive order suspending immigration from Iraq and citizens of six other Muslim majority nations.The vote is not binding on the Iraqi government, but it still could strain relations between Baghdad and Washington amid the military operation to retake Mosul from the Islamic State group.The vote was described as “a recommendation,” by deputy speaker of parliament, Sheik Humam Hamoudi, and called for the U.S. Congress to “pressure the American administration to reconsider that decision regarding Iraq.”The Foreign Ministry also spoke out against Trump’s order, saying it “regrets such a decision” against a country that the U.S. considers “an ally and a strategic partner.”

“It is a surprise that Iraq is covered with this order because it is not among the countries that export terrorists or Takfiri ideology,” the statement added, using an Arabic term that refers to Sunni extremists. “The Iraqi community inside the U.S. enjoys a good reputation and its members have not involved in any terrorist act.”The ministry described Trump’s decision as “wrong” and called for him to reconsider it. The 90-day travel ban affects citizens of Iraq, Syria, Iran, Sudan, Libya, Somalia and Yemen.The Pentagon is compiling a list of Iraqis who have supported U.S. and coalition personnel to help exempt them from Trump’s ban, said Navy Capt. Jeff Davis, a Pentagon spokesman. The list will include those who have tangibly demonstrated their commitment to supporting U.S. forces, such as translators, drivers and Iraqi forces who may be training in the U.S., he said.Trump’s ban and the Iraqi parliament decision came as Iraqi forces are more than three months into the fight to dislodge IS militants from Mosul. Iraqi forces control about half of Iraq’s second-largest city.The Mosul operation is the largest in Iraq since 2003 and one in which Iraqis are more dependent than ever on U.S. support. American forces withdrew in 2011. The Pentagon says there are more than 5,000 U.S. troops in Iraq.Small numbers of U.S. forces have operated inside Mosul and from the air. The U.S.-led coalition said it has dropped more than 9,900 munitions in and around the city since the operation began in October. Iraqi forces are largely dependent on coalition airpower to retake and hold territory.Iraqi officers leading the Mosul battle say they doubt that politics will hurt the military effort against IS. Brig. Gen. Haider Fadhil said he believes U.S. support for Iraq will increase, since Trump has pledged to hasten the pace of the fight against the militants.The measure, a copy of which was obtained by AP, calls for a reciprocal measure “in the event the American side will not retreat from that order to maintain the state prestige and the dignity of the Iraqi people.”That language suggests it would deny entry to Americans holding valid Iraqi visas. It also called for the U.S. Congress to pressure the Trump administration to reconsider its ban.The decision did not detail when it would be enacted or to whom specifically it would apply: U.S. military personnel, aid workers, oil companies or other Americans in Iraq.“Parliament absolutely lacks the authority to originate legislation of any kind regulating anything the executive branch does,” said Kirk Sowell, a political and legal analyst focused on Iraq and publisher of the Inside Iraqi Politics newsletter.The prime minister’s office said the government “is waiting to receive the decision officially and it will take care of it and follow up with the American administration to discuss what is needed to ensure the respect of agreement,” according to government spokesman Saad al-Hadithi.Since taking office in 2014, Prime Minister Haider al-Abadi has struggled to balance his government’s dependence on both the U.S. and Iran in the fight against IS.Iraq is reliant not only on coalition airstrikes that have helped its forces retake nearly all the territory IS once held, but also on U.S. financial aid. Earlier this month, Baghdad signed a $1 billion sovereign loan guarantee with the U.S. aimed at financially supporting Iraq during its economic crisis.Iraq continues to be dominated by powerful political blocs with close ties to Iran, another key ally. Al-Abadi’s political opponents – former Prime Minister Nouri al-Maliki and influential Iraqi cleric Muqtada al-Sadr – regularly highlight his close relationship with the U.S. in seeking to portray him as weak.The U.S. Embassy offered only a brief statement, saying “we have seen the reports of the parliament vote and are reviewing its details. We refer you to the government of Iraq for further clarification.”Even if the government were to take up the parliament’s call and implement the ban on Americans entering Iraq, it is not certain that the semi-autonomous northern Iraqi Kurdistan region – which has equally strong tie with Washington – would abide by it. The Kurdistan region has its own immigration policies and largely controls its own borders.