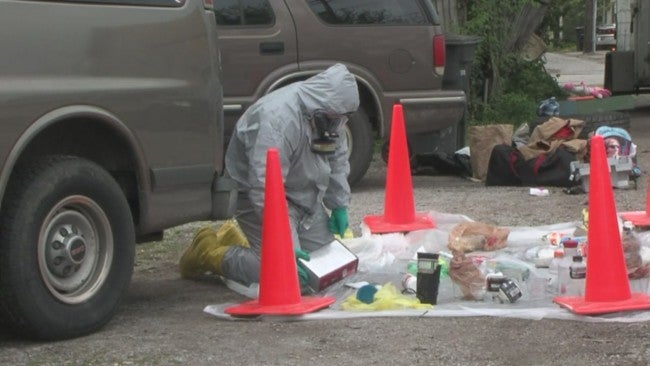 INDIANAPOLIS (WISH) – There are new numbers on drugs that could put Indiana at the top of the list. Indiana State Police told 24-Hour News 8 a new report shows Indiana will likely have the most meth lab seizures in the country again.

New numbers from ISP show troopers busted more than 1,400 meth labs in Indiana during 2014. That’s actually a 17-percent decrease from 2013, but other states around the country are seeing 30 to 40 percent drop offs. ISP said that’s because meth addicts are now finding their drug in a different way. Instead of making the drug themselves, they’re finding a stronger meth that has made its way across the border from Mexican cartels.

“You’ve got explosive meth labs, you’ve got poisonous gases that are both poisoning the people who are manufacturing, and anybody who is in the residence and the house or the area the time that it’s being manufactured,” said Crawford, “Those issues that follow meth labs create a much more hazardous environment. We’re spending a lot more money to clean up meth labs both from a law enforcement perspective as well as a community perspective…you’re dealing with a different clientele so to speak as well as dealing with a lot more ancillary issues that come from the meth labs.”

It can cost $2,000 for police to process a meth lab. That’s not factoring in the cost of child care, prosecution or the property owner’s cleanup.

Another trend ISP found in 2014’s statistics was the movement of meth from rural areas to bigger cities.

“While Indy still has a significant supply of Mexican meth that comes in, we’re seeing more labs here,” said Crawford.

Crawford said meth has typically been a more rural issue, but not anymore. Many of the labs busted in Marion County have been the result of tips from the public. Crawford encourages anyone with information on a potential meth lab to report it. You can find what you should look for and how to report it here.