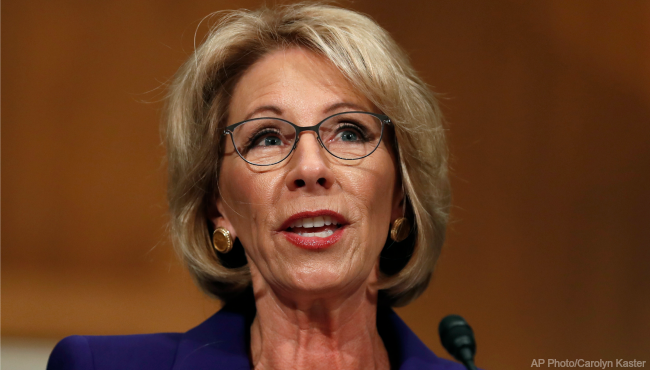 24-Hour News 8 sat down with ISTA president Teresa Meredith after Vice President Mike Pence said he would likely cast the tie-breaking vote to confirm DeVos as secretary of education.

“I’m really disappointed, discouraged and actually quite bothered by it,” Meredith said.

Meredith said she is worried because DeVos has no background in education.

Meredith said any time there is a new secretary of education, there are changes to school funding, which affects if programs get money or how the funds make it to the state. DeVos has been very supportive of charter schools and voucher programs. Many critics believe that shows she will not be supportive of public schools. Supporters argue public schools could use an outsider’s influence.

Meredith said if DeVos is confirmed despite nationwide backlash, it will show lawmakers are focused on their own agendas and not students.

“It would really be nice if someone who is looking to put someone in this kind of position — to have such an impact on the work in schools across the country — it would be nice if they would actually ask the people that have to execute the work that’s requested or put into place the plans that come from this department,” Meredith explained.”It’s very frustrating being an educator and look to this position of U.S. secretary of education and not see an actual educator there or anyone who actually has a background in education. She (DeVos) clearly does not.”

The teachers union often clashed with Pence when he was governor. Now, it’s quite possible that Pence will be the deciding vote to confirm DeVos.

“It’s not surprising to me, in that he supports the privatization movement and the voucher movement,” Meredith said. “It’s very concerning to me that he’s not raising the flag saying, ‘Shouldn’t we be talking to educators? Shouldn’t we be looking for someone with at least an education background?’ or ‘Shouldn’t we at least find someone who knows something about K through 12 public school?’,” said Meredith.

Meredith said ISTA will have to wait and see how the new secretary of education impacts public schools.

“I’ll be looking to [State Superintendent of Public Instruction] Dr. McCormick to see what direction she chooses to take, depending on what happens at a federal level. We’ll be watching,” Meredith said.

24-Hour News 8 reached out to McCormick. She did not want to speak about DeVos, but a spokesperson said if and when DeVos is confirmed, McCormick will release a statement.