ISTEP will be shortened a few hours 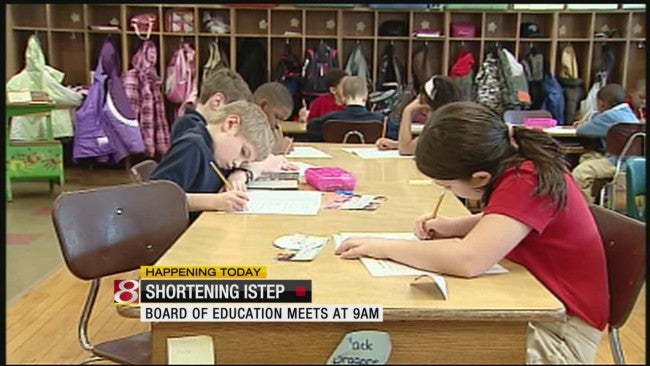 INDIANAPOLIS (WISH) – A week of political battle between the Republican governor and the Democratic state school superintendent has ended with Glenda Ritz and Mike Pence in agreement on a shorter ISTEP test.

It’s good news for teachers, parents, and students in Indiana public schools who learned at the beginning of the week that the ISTEP exam would take 12 hours of testing time.

That’s up from six hours a year ago.

It will still be longer this year but will now be reduced to about nine hours.

Two outside consultants hired by the governor told the State Board of Education Friday morning that testing is important.

“But we also believe that it’s unrealistic,” said former Michigan State professor Ed Roeber, “especially for young children to take a 12-hour plus exam so something needs to be done.”

They made five recommendations that would cut the testing time by three hours and Superintendent Glenda Ritz was eager to respond.

“We are prepared to move forward with the three hours and five minutes (reduction,)” she said, “and the suggestion to the General Assembly to suspend social studies, yes.”

State lawmakers must approve the plan to eliminate social studies testing in 5th and 7th grades because it means the test won’t otherwise meet state requirements.

It’s an idea first suggested by the governor earlier this week.

His appointees on the board of ed went along with the idea but they blocked a Ritz plan to suspend school accountability measures for a year.

“I do not believe that today is the right time or place to have the discussion that you presented before us as it relates to pausing accountability,” said board member Gordon Hendry. “I might add that I’m opposed to that.”

And one board member was careful to blame Ritz for the testing crisis.

“I just think that it has to be crystal clear that there has been a big leadership void,” said Daniel Elsner, “that put a lot of people through a lot of angst that did not have to happen.”

The decision to cut the test fell to Ritz and Ritz alone. She didn’t have to do it and earlier this week some of her aides indicated it might not be possible.

The outside experts say that pulling it off at this late date will still be challenging.

Testing starts at the end of the month.