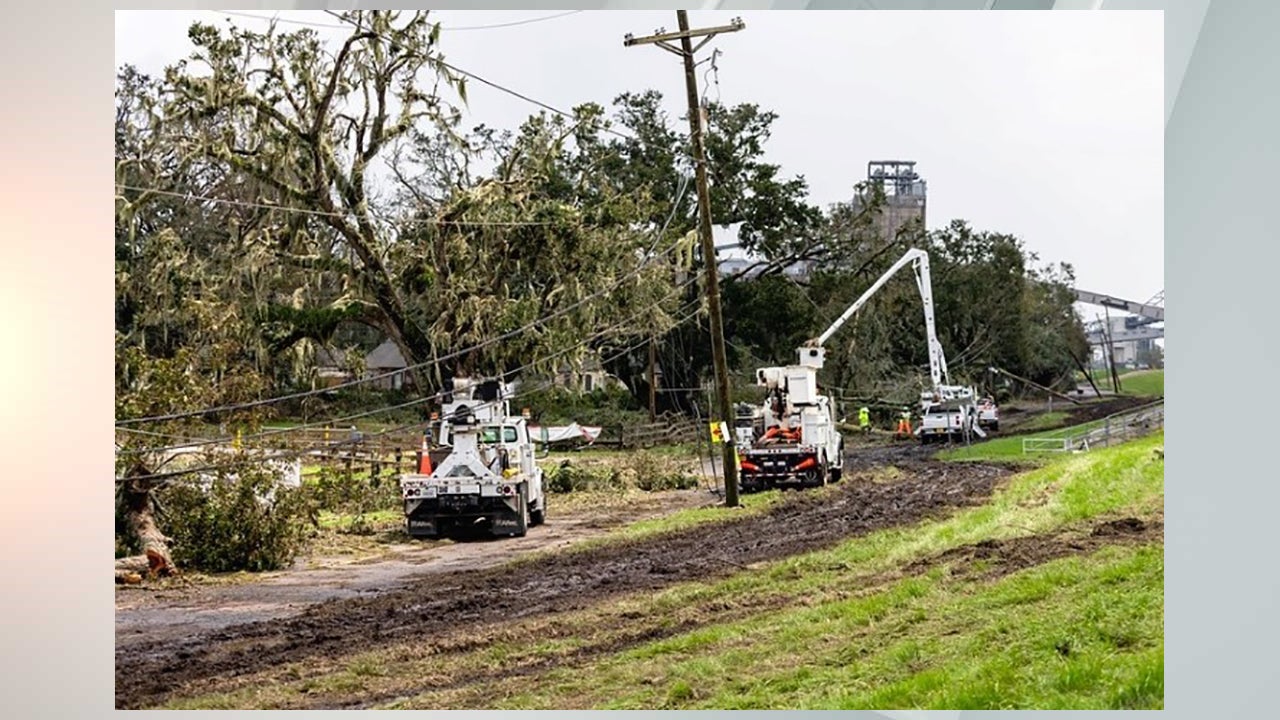 (CNN) — Some of the areas in Louisiana that were hit hardest by Hurricane Ida could be looking at more than three weeks before power is restored, Entergy Louisiana said.

They include the parishes of Lafourche, Plaquemines with the exception of Belle Chasse, St. Charles, Terrebonne and part of Jefferson, the utility company said on its website. Those areas might not have electricity until Sept. 29, Entergy estimated.

Sunday afternoon — one week after Ida made landfall on the Gulf Coast — more than 598,000 customers were still without power in the state, according to PowerOutage.us.

Entergy Louisiana, which provides electric service to more than 1 million customers, estimated that power will be restored to the vast majority of its customers by Wednesday.

“Electricity is one of the biggest challenges that we have across Southeast Louisiana. … There’s not an even rate of restoration going on, and that’s always going to be the case. I’m always happy to see people getting powered up, and some people are going to be quite a while,” Louisiana Gov. John Bel Edwards said Saturday.

The number of customers without power at midday Saturday was 718,559, which includes homes and businesses that equate “a lot more” people, Edwards said at a news conference in Livingston Parish. That’s down from a peak of 1.1 million customers who were without power immediately after Ida battered Louisiana.

Edwards said the electrical infrastructure needs reinforcement, but there are limitations.

“It is hard for me to imagine that we will ever have an electrical infrastructure — or other types of infrastructure as well — that can withstand a storm of this severity without any disruptions. But we know we can minimize those disruptions,” Edwards said.

Doing so, however, will require a large investment that will pay for itself over time, Edwards said.

“Especially when you consider that not just the severity of these weather events but the frequency of severe weather events is increasing,” he said. Louisiana has been hit by five hurricanes within 368 days, Edwards noted.

“We can’t continue to build things back to the current standard,” he said.

Entergy Louisiana said its 24,000 storm crew members are working “as safely and as quickly as possible” to get things back up and running.

“In addition to the 24,308 distribution poles damaged or destroyed, 29,084 spans of wire down, and 5,742 failed transformers … we have identified 212 transmission structures that have been destroyed by Hurricane Ida, meaning they have to be completely rebuilt,” the utility said in a statement on its website.

The lack of power is so unbearable that New Orleans on Saturday began sending electricity-deprived people to powered shelters in northern Louisiana and Texas. The new shuttle program picks up people from the city convention center by charter bus.

“We’re doing everything we possibly can to speed relief to you,” Edwards said as he asked for patience from those affected by Ida.

“This is tasteless, it is odorless, and you don’t know it’s happening until it’s too late,” said Edwards, referring to carbon monoxide.

Gas in short supply as people wait hours to fill up

The devastating storm also left some gas stations tapped out.

A day earlier, Eric Mertz said, he drove 20 miles from his home in neighboring St. Charles Parish to wait for gas outside a New Orleans gas station, where he believed the lines were shorter than they were near his home.

Still, he waited for hours.

“I’m just wondering where the help is,” Mertz said Friday. “I don’t have air conditioning. No lights. I had Covid last year. I was in the ICU for 14 days, and I’m on oxygen (treatments now). And I don’t have no electricity — it’s rough.”

The 13th death in the state related to the storm was a 74-year-old man who died “due to heat during an extensive power outage,” the Louisiana Department of Health reported Sunday.

Many gas stations are not working or don’t have fuel — and those that do have people waiting outside them for hours. Many want gas to fuel their vehicles — some to drive out of the region, and some just to use their cars as air-conditioned places to rest. Others want to fuel their at-home generators to keep electricity going.

In one instance, a feud over gas became fatal when a man waiting for gas Friday was shot and killed, apparently after confronting a man who cut the line at a gas station in Metairie, Jefferson Parish Sheriff Joseph Lopinto said.

A suspect turned himself in Friday night, Lopinto said at a news briefing Saturday. He claimed self-defense, “which doesn’t match up any of the witness testimony,” the sheriff said.

Preliminary information indicates the suspect bypassed the gas line “and was confronted by the person that he cut,” Lopinto said. The suspect went back to his car, retrieved a gun and fatally shot the victim, Lopinto added.

The sheriff urged patience at the pumps.

“(We don’t) have enough policemen out there on the street to … sit in every single gas station to play babysitter,” he said. “We … need people to act like adults.”

‘Not a neighborhood that’s been spared,’ local official says

Parts of Louisiana’s Jefferson Parish experienced “more busted power poles (and) down utility lines than we’ve had in history,” Councilman Dominick Impastato said Saturday in a video posted on Twitter.

Specifically, the communities of Metairie and Kenner experienced widespread destruction, he said.

A boil water advisory in the parish stems from the power outages, he said. Impastato estimated that about 80% of the damaged houses are relatively habitable in Jefferson.

“That’s going to speed up that recovery (and) make it very manageable to get back to where we were,” Impastato said.

Meanwhile, officials in Terrebonne Parish are asking residents to limit water usage because of power outages in the parish’s sewage system.

Officials tweeted that there are more sewer lift stations than generators in the parish, which is causing the stations to overflow. The situation is “presenting a serious public health threat.”