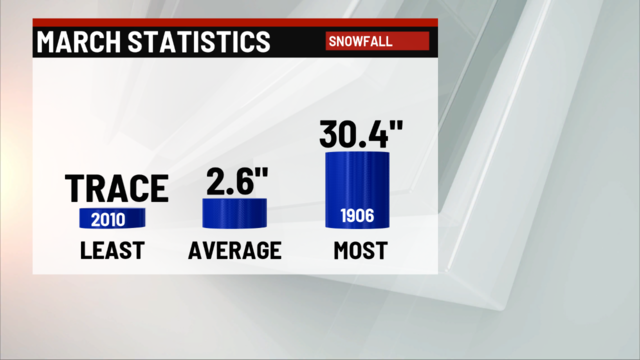 INDIANAPOLIS (WISH) — Many people are over the snow by this point of the year, but March snow isn’t uncommon.

March on average is the fourth-snowiest month of winter with just over 2.5 inches of snow in Indianapolis. While there have been many years that we have only picked up a trace of snow in March, we have never recorded a March without snow. The most snow recorded for March was in 1906, a whopping 30.4 inches of snow!

This snowfall season, we’re just over 18 inches of snow. We’re slightly below average but in much better shape than this point last year when we were at less than 10 inches of snow.

However, if we don’t pick up the additional snow to meet the average, it would be another year of below-average snowfall. The last winter with above-average snowfall was the record-setting season of 2013-14. With that said, we may still have our opportunity this season to pick up on the deficit. The average date of the last measurable snow is at the end of the month, and the record latest measurable snow was May 9!

We will see a decent swath of snow moving through the Midwest on Thursday, which should leave us with an inch or 2 of snow. Thursday’s snow will likely put Indianapolis over the average for the month, and would make for nine of the last 20 years of above-average snowfall for March!