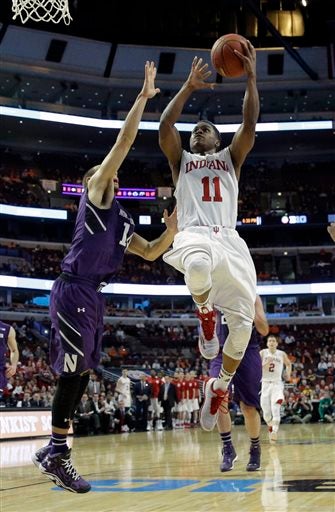 CHICAGO (WISH) – With their NCAA tourney hopes hanging in the balance, IU came with its best performance in weeks, dominating Northwestern on both ends of the floor in a 71-56 victory that could push them off the bubble.

“For this time of year and in a situation like this, to come in here and play that way with the youth of this team and to be energized is crucial,” said coach Tom Crean.

Freshman James Blackmon, Jr. scored 25 points in his best effort away from Assembly Hall. He says he just plays better when the stakes are higher.

“It was about the mindset. We also felt like we owed them one, and we’ll just try to carry it over to tomorrow,” said Blackmon.

IU meets Maryland at 6:30 Friday in the quarterfinals.

As of this writing, there is no official word on Hanner Perea’s knee, which was x-rayed at the United Center after he was injured in the second half.