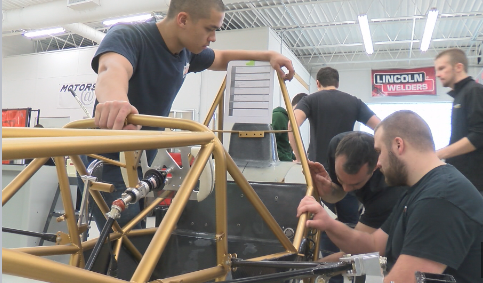 INDIANAPOLIS (WISH) – A group of IUPUI students are building a racecar that will hit the track this spring. It will compete in Michigan against other student-built cars from around the world.

IUPUI is the only school in the country with a four-year motorsports engineering program. The goal isn’t just to build cars or win races, but to catapult students into the world of racing.

Miles Gunty is a senior who’s working on a car that will compete in the Formula SAE competition. The competition rules state all cars must be designed, built and raced by students.

“It’s probably one of the most exciting things I get to do because I’m able to take what I learned in the classroom and apply it here,” Gunty said.

Gunty and his classmates also spend hours hitting the books, studying calculus, physics and chemistry among other topics.

Andy Borme is an instructor, adviser and former IndyCar engineer.

“This program is very difficult. From a starting class of probably 80 freshman, we only graduate possibly 5 to 10 by the time that class gets through,” Borme said.

Some of Borme’s former students are working in NASCAR, NHRA and, of course, IndyCar. A recent graduate of the program worked as an engineer last year on the first place Indy 500 team.

“That’s why we’re here. We’re here to generate the next motorsports engineer,” Borme said. “Having our student on the podium at the Indy 500, that’s about as good as it gets.”

Students also compete in a series of other races outside of Formula SEA, including a GoKart races that students are gearing up for right now.