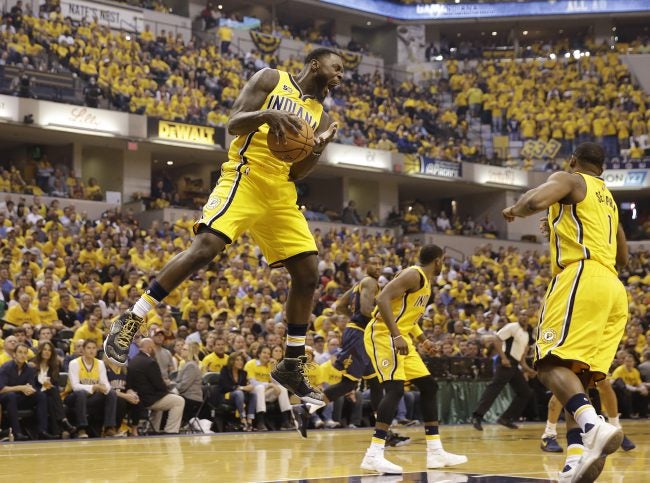 INDIANAPOLIS (AP) – LeBron James finished with 41 points, 13 rebounds and 12 assists, and the Cleveland Cavaliers set an NBA postseason record by erasing a 25-point halftime deficit to beat the Indiana Pacers 119-114 on Thursday night and take a 3-0 lead.

James passed Kobe Bryant for No. 3 on the NBA’s career playoff scoring list and tied another NBA record by winning his 20th consecutive first-round game.

The Cavaliers will try to sweep the series Sunday.

Cleveland trailed by 26 in the first half and was still down 74-49 at halftime. The largest halftime deficit overcome to win a playoff game had been 21 points by Baltimore against Philadelphia in 1948.

James scored 13 points in the third quarter to get the Cavs within 91-84.

This comeback began with a second straight devastating third-quarter punch from the Cavs.

After Cleveland cut the deficit to 77-62 and then watched Indiana extend the margin to 20, Cleveland finished the quarter on a 17-4 spurt to make it 91-84.

Things only got worse for the Pacers.

George’s 3 with 5:15 to go gave Indiana a 104-103 lead – its last of the game. James answered with a layup out of a timeout and the Cavs never trailed again.

It’s only the second time in the Pacers’ NBA history they have lost the first three games in a best-of-seven series. Indiana has never endured a four-game sweep since joining the NBA.