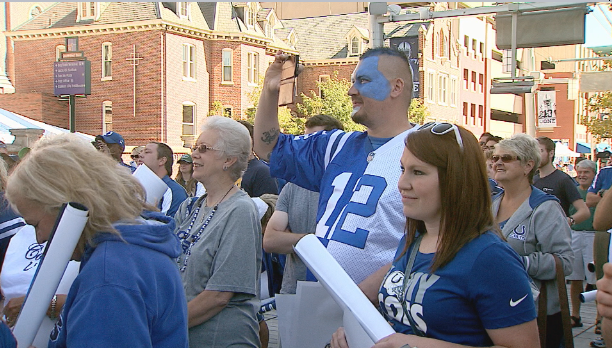 INDIANAPOLIS (WISH) — Colts fans swarmed downtown Indianapolis Monday in anticipation of the team’s home opener against the New York Jets. They were greeted on Georgia Street by former Colt Jeff Saturday and members of the Monday Night Football crew, including Jon Gruden.

In an interview with 24-Hour News 8, Saturday said he likes what he sees with this year’s Colts team.

“This team will be playing late in the season for a championship, the AFC side, and I think they’ll truly battle,” the Super Bowl champion said.

Saturday knows the Colts fans will be showing their support the whole way.

“I tell you, of all the time I get to travel with ESPN and see different places, Indy has the greatest energy in the NFL. So many great fans,” Saturday said.

Colts fan decked out in blue and white cheered Saturday on as he spoke to the crowd. Mike Hopson, a self-proclaimed “super fan,” had high hopes for Monday night.

Local business owners also have high hopes for the season. The owner of the Slippery Noodle Inn, a blues bar a few blocks from Lucas Oil Stadium, said his bar had all hands on deck Monday. He said his sales tend to skyrocket on game day, and he was hoping for a victory so fans would stay out and celebrate.

But fans like Gary Vukosa, who traveled from Canada to see his Colts, were celebrating long before the game even started.

“I’m waiting to see us in the Super Bowl this year, for sure,” Vukosa said. “We had a rough game last week, but I think we’re going to pick it up now.”

The tailgate on Georgia Street was scheduled to run until kickoff time at 8:30 p.m. Another party was held just outside Lucas Oil Stadium with food trucks and live music.