Joe Biden not running for President in 2020 – ‘at this point’ 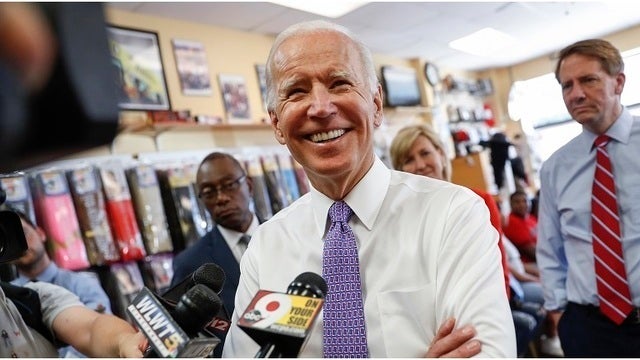 London (CNN) — Former Vice President Joe Biden sidestepped a question Wednesday about his 2020 intentions, saying he is not running for president “at this point.”

Speaking at an event in London, Biden was asked about whether he could provide the best alternative to President Donald Trump when it comes to foreign policy.

Instead, Biden argued every potential Democratic contender for the 2020 presidential campaign would adopt a “more enlightened foreign policy” than the current president.

“I think there are many people in the Democratic Party that can defeat Trump and not a single aspiring candidate that I can think of for the nomination — and I am not one at this point — does not have a better understanding and formulation of American foreign policy than President Trump,” Biden told CNN during a question and answer session at an event at Chatham House.

“I’m not being rankly partisan here — the President acknowledged at the outset he didn’t know a lot about foreign policy. He said he watched the news, although I think he’s getting more and more informed out of necessity,” he added. “I think there are any number of potential candidates seeking the nomination from (California Democratic Sen.) Kamala Harris to a whole range of people in my party who would pursue a much more enlightened foreign policy than the President.”

The former vice president has said he will decide whether to pursue a presidential bid after the midterm elections. Trump has previously described the prospect of running against Biden in 2020 as a “dream.”

Biden’s comments came after he delivered remarks on the transatlantic relationship at Chatham House. During those remarks, he refrained from criticizing the President directly by name but warned of a “siren call of phony nationalism and populism and xenophobia that exists in many western democracies today, including the UK and the United States of America.”

Trump has turned to criticizing his potential rivals, including Biden, during campaign events. At a rally in Kansas last week, the president called Biden “Sleepy Joe” and noted the former vice president’s suggestion that if he were in high school, he’d take Trump “behind a gym” after his crude comments about women captured on the infamous “Access Hollywood” tape.

“I’d love that,” Trump said. “Go like this,” he said, blowing into his hand, “and he’s down. He would never get up