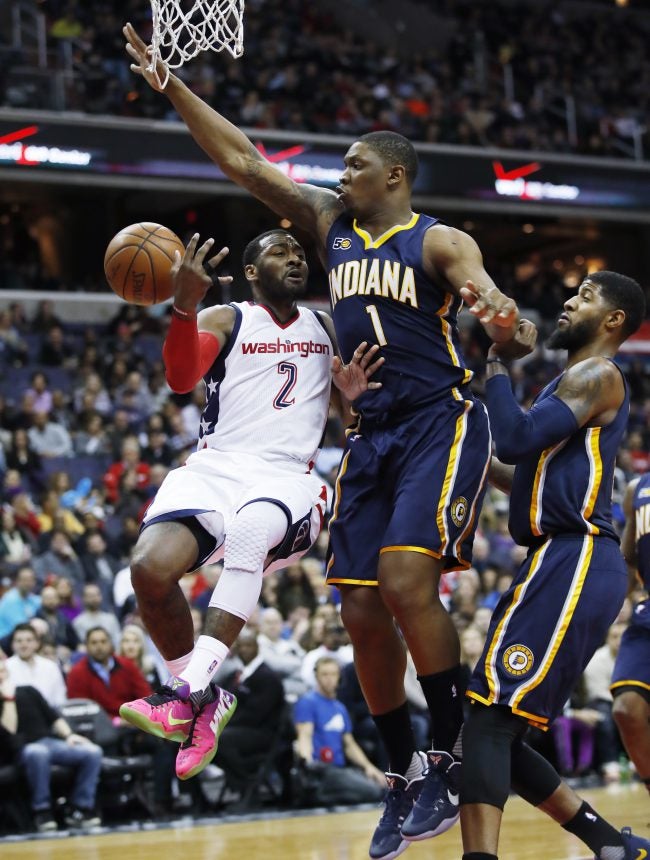 WASHINGTON  D.C. (AP) – In a matchup between two of the NBA’s top teams since New Year’s Day, John Wall heard “MVP!” chants while producing 26 points and 14 assists to lead the Washington Wizards past the Indiana Pacers 112-107 Friday night.

After Monta Ellis made it a one-point game at 103-102 on a floater in the lane with about 1 1/2 minutes remaining, Wall took over. The All-Star point guard accounted for eight of Washington’s last nine points on a 17-foot pullup jumper, a pass to Markieff Morris for a 3, and then three free throws.

Morris scored a season-high 26 points and had 10 rebounds, one game after sitting out a win at Brooklyn with an injured right calf.

Bradley Beal added 20 points for the Wizards, who have won 18 of their past 19 home games. The exception? A loss in their last time out in Washington, 140-135 in overtime against LeBron James and the Cleveland Cavaliers on Monday.

Paul George scored 31 points for Indiana, which had won a season-best three consecutive road games and seven of eight overall (and their lone defeat in that run came against Cleveland, too).

This was a game between two of the NBA’s top four teams since New York’s Day. Entering Friday, Washington was No. 2 at 15-5 in that span – behind only Golden State – and Indiana was at No. 4 with a 13-5 record.

And this one was close.

Washington led 86-81 entering the fourth quarter. The game was tied at 59 after a first half filled with swings, including a 12-0 run for the Pacers.