Jupiter at its brightest in clear Indiana sky 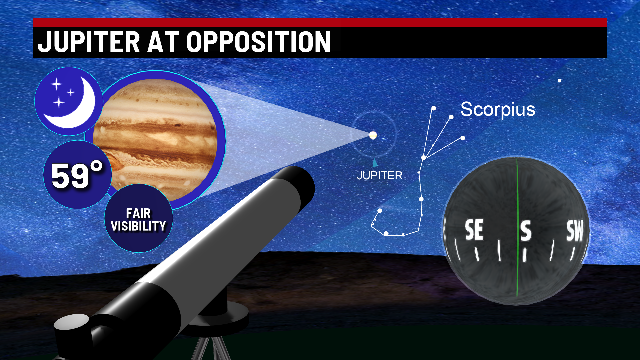 INDIANAPOLIS (WISH) — A clear sky Monday night should be a delight for stargazers across central Indiana.

All month long, the planet Jupiter has been visible to the naked eye. On Monday night, it will appear at its brightest because the planet is in opposition with the sun. Opposition means the sun, Earth and Jupiter are aligned, with Earth in the middle.

With binoculars, four of Jupiter’s brightest moons — Io, Europa, Callisto, and Ganymede — will be visible. With a telescope, a few of the individual cloud belts around the planet and possibly even the giant red spot will be visible.

Locally, look to the southeastern sky at dusk about 9:13 p.m. Monday. The solar system’s largest planet will be visible all night until dawn at 6:17 a.m. Tuesday.

While Jupiter will be its brightest Monday night, it remains visible through the end of June

More images of the biggest planter are available from NASA’s Juno Spacecraft, which is orbiting the planet.