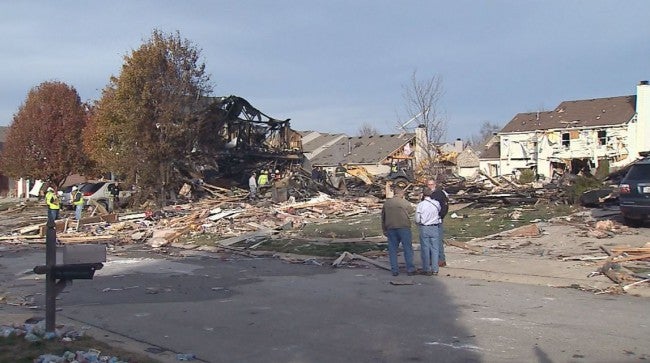 SOUTH BEND, Ind. (WISH) – More than two and a half years after an explosion killed two people and leveled homes in the Richmond Hill subdivision, a St. Joseph County jury found one of the primary suspects in the case guilty.

After a six-week trial involving nearly 200 witnesses and thousands of pieces of evidence, 12 jurors found Mark Leonard guilty of 53 criminal charges in fewer than four hours of deliberation.

The courtroom was stoic as the verdict was read. Some tears could be seen. Judge John Marnocha warned the courtroom ahead of the verdict that he wouldn’t tolerate any loud reactions.

The father of Dion Longworth, who died in the November 2012 explosion, struggled to say he could forgive Mark Leonard, worrying that would in some way imply he finds what Leonard did acceptable.

“I do have to let go of it every day,” John Longworth said.

Dion’s dad said the verdict made him sad. He said it’s never a happy day when someone is sent to prison.

“This is a person who has basically thrown away his life,” John Longworth said. “That’s sad to me. That adds sadness to the sadness.”

“I’m relieved. It’s all the justice we’re going to get in this particular case, but it’s justice,” Buxton said.

He said someone told him before lunch Tuesday that he and others “are awfully strong.”

“We are not strong,” he said. “You’ve just got to do what you’ve got to do.”Hear more from Longworth and Buxton in this report from South Bend:

Marion County Prosecutor Terry Curry said there’s no way to relieve the grief and sorrow felt by the family members of victims in the Richmond Hill explosion, but he said they can seek justice.

“I’m relieved for the parents and all the residents of Richmond Hill,” Curry said Tuesday outside the courthouse.

Prosecuting attorney Mark Hollingsworth said Tuesday he finally had an opportunity to offer condolences to family members of victims. Up until Tuesday, he said he was focused on the details of the case and getting the guilty verdicts.

“It’s my time to tell them I truly understand their loss,” he said, later adding, “Nothing obviously can ever bring back what’s gone. Hopefully there’s some sense of justice, whatever your definition of justice is. Hopefully they got some semblance of that today.”

“It’s my time to tell them I truly understand their loss.”

Deputy Prosecutor Denise Robinson, who says the Mark Leonard trial was the longest of her career, said she was “very grateful” the jury came back with the guilty verdicts after considering all of the evidence.

“It means more to the family members of John (Dion) and Jennifer Longworth and more to all those residents of Richmond Hill than it does to me personally,” Robinson said. “This is what I do for a living, but I’m grateful that I was able to bring the case successfully to this jury for them.”DEFENSE PROMISES APPEAL

mistrial that dotted the six-week trial in South Bend would be seen in the appeal process.

The defense team said they felt numb and overwhelmed after hearing 53 guilty verdicts read. Leonard’s attorneys didn’t get an opportunity to

immediately speak with him, so they weren’t sure how he was taking the verdict. They told him in advance to stay calm. They plan to meet with him Wednesday morning.

Shircliff also said he was not surprised by the guilty verdict because the prosecution’s whole case deviated from the belief that the explosion was carried out for insurance fraud; and if you believe that, it’s not hard to find a conviction.

Defense attorneys plan to file a motion to dismiss the life without the possibility of parole charges.NEXT STEPS FOR LEONARD

There will be a hearing Wednesday on the last two charges the jury brought against Leonard – murder, which brings the possibility of a life sentence in prison without parole. This second phase of the trial will be heard by the judge, instead of a jury, because of a waiver signed by Mark Leonard and approved by the judge Tuesday morning.

Sentencing for Leonard is likely to include victim impact statements, in which victims and family members of victims have an opportunity to speak directly to Leonard. That hearing has not yet been scheduled.NEXT STEPS IN THE CASE

Bob Leonard is the next defendant to be tried in the case, and his jury trial is scheduled for January in Allen County. Like his half-brother, Mark Leonard, Bob’s case was moved out of Indianapolis due to media coverage surrounding the case.

Bob and Mark Leonard are just two of the people who were charged in the case. Monserrate Shirley, who owned the house that exploded, pleaded guilty as part of a plea deal in the case. The terms of the plea deal stipulate she must testify against her co-defendants. Gary Thompson and Glenn Hults have also been charged in connection to the explosion.