Kelly dismisses as false a report he called Trump an ‘idiot’ 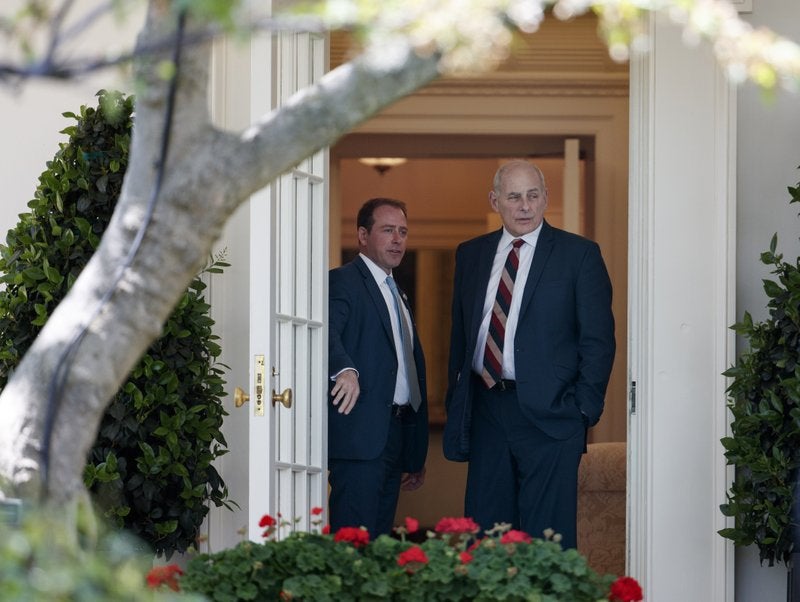 Kelly’s insult to the president’s intelligence, confirmed to The Associated Press by the former official, came as his clashes with Trump over policy and personnel grew louder and more frequent. Kelly, who has cast himself as safeguarding the public from the president, has also threatened to quit the White House on several occasions.

Kelly’s disparaging remark was first reported Monday by NBC News. In a statement Monday, Kelly called the report “total BS,” and characterized his relationship with Trump as “incredibly candid and strong.” He added of the president, “He always knows where I stand and he and I both know this story is total BS.”

“Remember, he is a Marine. Once a Marine, always a Marine,” said Fuentes. “The office of the commander in chief is held to the highest regard.”

Trump appeared to react to the NBC report on Twitter on Monday evening. He tweeted, “The Fake News is going crazy making up false stories and using only unnamed sources (who don’t exist).” He added, “The White House is running very smoothly.”

In recent months, Trump has chafed at Kelly’s management style, and has occasionally talked with friends about replacing him.

Indeed, Trump has floated the idea of appointing Kelly to run the Department of Veterans Affairs in calls with outside allies, said two people familiar with the conversations, though there are other possibilities in the mix and the president often floats ideas without taking action. Kelly has made clear he wouldn’t accept such an offer.

In his early days in the White House, Kelly imposed strict controls on access and the flow of information to Trump, though his direct influence has waned somewhat since then, aides said. Kelly allies insist he has merely trained the staff to follow his management protocols, but officials note that Trump has grown more willing to act unilaterally, ignoring or simply not seeking out the advice of his top aide.

The disagreements between the retired four-star general and the businessman-turned-president have grown more animated, and on one such occasion last year Kelly blasted the president as “an idiot” to staffers, the former administration official told the AP. The former official was not authorized to speak publicly about private conversations and requested anonymity.

Kelly has also told confidants that he has at times served as a guardrail, protecting the American people from Trump, according to a person familiar with his views. The person, and others who spoke about private conversations, was not authorized to discuss private conversations by name and requested anonymity.

Frustrated with his chief of staff, Trump has taken to paying more attention to the advice of former campaign aides like Corey Lewandowski, who appeared alongside the president at a rally in Michigan Saturday. During the rally, which one person likened to a trial, Trump called Lewandowski on stage and praised him for not being a “pushover” or a “patsy.”

The president also recently told an ally that he was still frustrated by an interview that Kelly gave to Fox News more than three months ago in which he suggested that Trump had “evolved” in his thinking about the need for a wall on the Mexican border.

Trump’s anger about that remark — the president believed it insulted his intelligence and made him look like a flip-flopper on a signature campaign issue — was “the beginning of the end” for Kelly, according to several Trump confidants.

Moreover, a number of people whom Kelly ousted or blocked from the West Wing — including Lewandowski and Anthony Scaramucci — are known to frequently fill the president’s ears with attacks on the chief of staff while telling Trump that Kelly has been holding him back.

The public revelation of an insult directed at the president’s intelligence is reminiscent of leaks last year that then-Secretary of State Rex Tillerson called Trump a “moron.” That episode created what White House officials described as an irreparable rift between Trump and his chief diplomat, and ultimately led to Tillerson’s unceremonious March firing.

Kelly said NBC’s report “is another pathetic attempt to smear people close to President Trump and distract from the administration’s many successes.”

Still, Kelly has told people close to him that while he wanted to make the one-year mark in the position — that would mean late July — though he no longer is confident he will.

Fuentes, meanwhile, said that Kelly is distressed to see his name tainted, but: “The reason that Kelly’s here is because he believes in this country and he’s a man of service.”

“His relationship with the president is great, never been better,” he added. “They aren’t having any issues whatsoever.”