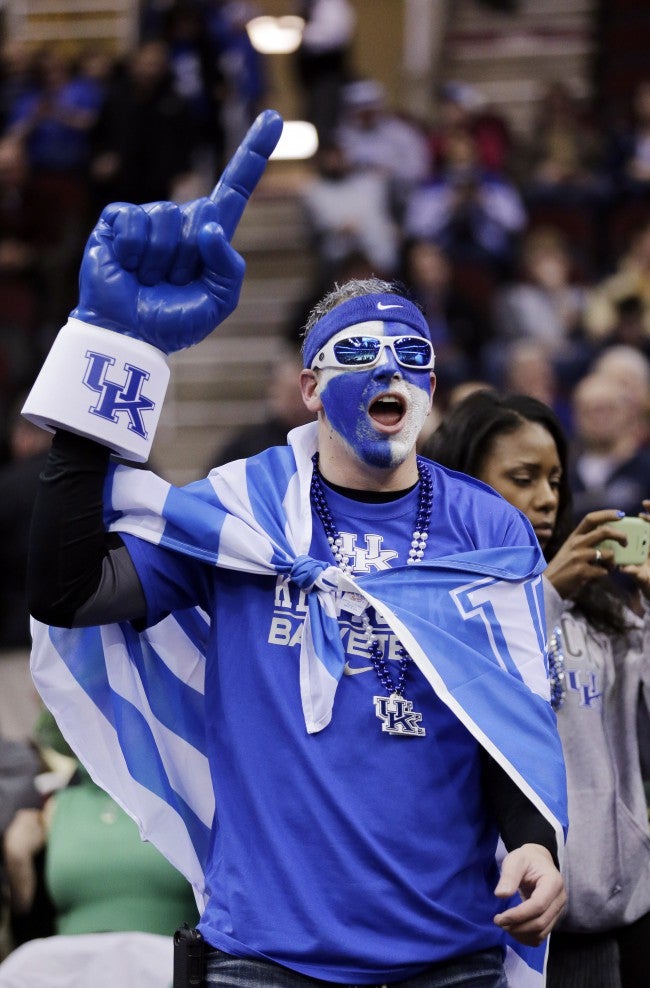 INDIANAPOLIS (AP) – John Calipari has endeared himself to Big Blue Nation because he does what Wildcat fans demand – win.

He’s delivered a championship, competes annually for national titles. Now he can immortalize himself in the eyes of Kentucky’s rabid fans by giving them something they’ve never had – an undefeated national championship.

And you can bet your last Bluegrass dollar that Indianapolis will be overwhelmingly blue with throngs flocking to see firsthand if their unbeaten Wildcats can get two more wins at the Final Four.

Then again, they always are.

“Ever since we’ve been going to games we’ve hoped for a season like this, unbeaten and perfect,” said Roy Holsclaw, 81, who attended Kentucky’s 1958 title-clinching game with his wife Katherine and has been a season ticket holder since 1959.

“I never thought we’d experience anything like this. It’s a once-in-a-lifetime possibility and we hope to see it happen.”

An estimated 10,000 turned out in Louisville for the Midwest regional and filled the lower bowl of the rival Cardinals’ home court – for practice. Yes, we’re talking about practice!

“I think they’re crazy, but I’ve said it before,” Calipari said of his fan base. “They’re nuts. But it makes them what they are and they’re passionate about letting everybody know, ‘I’m a Kentucky fan.'”

Friday’s open practice at 71,000-seat Lucas Oil Stadium leaves room for at least twice as many Wildcats fans to invade in hopes of giving Kentucky (38-0) a decided advantage in Saturday night’s Final Four rematch with Wisconsin (35-3). Fans of the Badgers, Duke and Michigan State no doubt have similar ideas and are known to travel just as well.

That’s just fine with Big Blue Nation, which welcomes challengers to their boasts of being national champions in fandom as well. The fans will take over the city because that’s what they do.

During last month’s Southeastern Conference tournament, Wildcat faithful swarmed Nashville to turn Bridgestone Arena to Rupp Arena South, buying up tickets as other schools were eliminated. When the SEC tournament was held in Atlanta, there would be many Wildcats fans the city became known as “Cat-lanta.”

Tipoff for the first semifinal game is still more than 36 hours away, and no disrespect to the Badgers, but Kentucky fans have already accounted for 17 percent of early ticket sales to Monday night’s championship on StubHub.com to see if the Wildcats can pick up a ninth NCAA championship.

“Nobody else is close,” company spokesman Cameron Papp said. “Kentucky has always driven sales for the NCAA (Tournament), and this year they’re undefeated.”

The Yankees? Forget about it. Good luck finding someplace other than maybe Boston’s Fenway Park where there are just as many spectators dressed in pinstripes – if not more – as there are fans in the home team’s colors.

But the scene in Indianapolis might be over the top for even Kentucky fans.

The Wildcats have the most victories ever (2,178), are just three behind UCLA with eight NCAA championships. A pipeline of blue chip talent who arrive with NBA projections ratchets up expectations of winning another title, and nothing else matters.

“People are kind of spoiled in Kentucky, but we look at it realistically,” said former Wildcats forward Larry Stamper, who played from 1969-73. “If we get great players coming in, we should always be great the next year.”

Kentucky has had unbeaten seasons in 1912 (9-0) under E.R. Sweetland and 25-0 in ’53-54 under the legendary Adolph Rupp, who won four titles. But the Baron of the Bluegrass couldn’t pull off the unbeaten champion feat.

“It would be really be extra special and a tribute to Kentucky basketball and what it’s done,” said Humzey Yessin, 87, a team manager from 1945-49 including Kentucky’s immortal ’48 NCAA championship squad known as the Fabulous Five.

The Wildcats have managed to ignore the hype, scrutiny, and projections as seemingly everyone wants to see if they follow through on a quest that Indiana State (1979), UNLV (1991) and Wichita State (2014) fell short of achieving. They are trying to become the first undefeated to win it all since Indiana did it in 1976.

If they do, Calipari would join Rupp as the only Kentucky coach to win multiple titles.

Given the fact that former coach Joe B. Hall – an assistant who succeeded Rupp and won the 1978 title during a 12-year stint – has a statue outside the players’ dormitory, there has been mild buzz about bestowing the same honor upon the Wildcats’ beloved Coach Cal.

Hall jokes, “there will never be another statue.”

Maybe not, but a 40-0 season would surely fuel the debate.