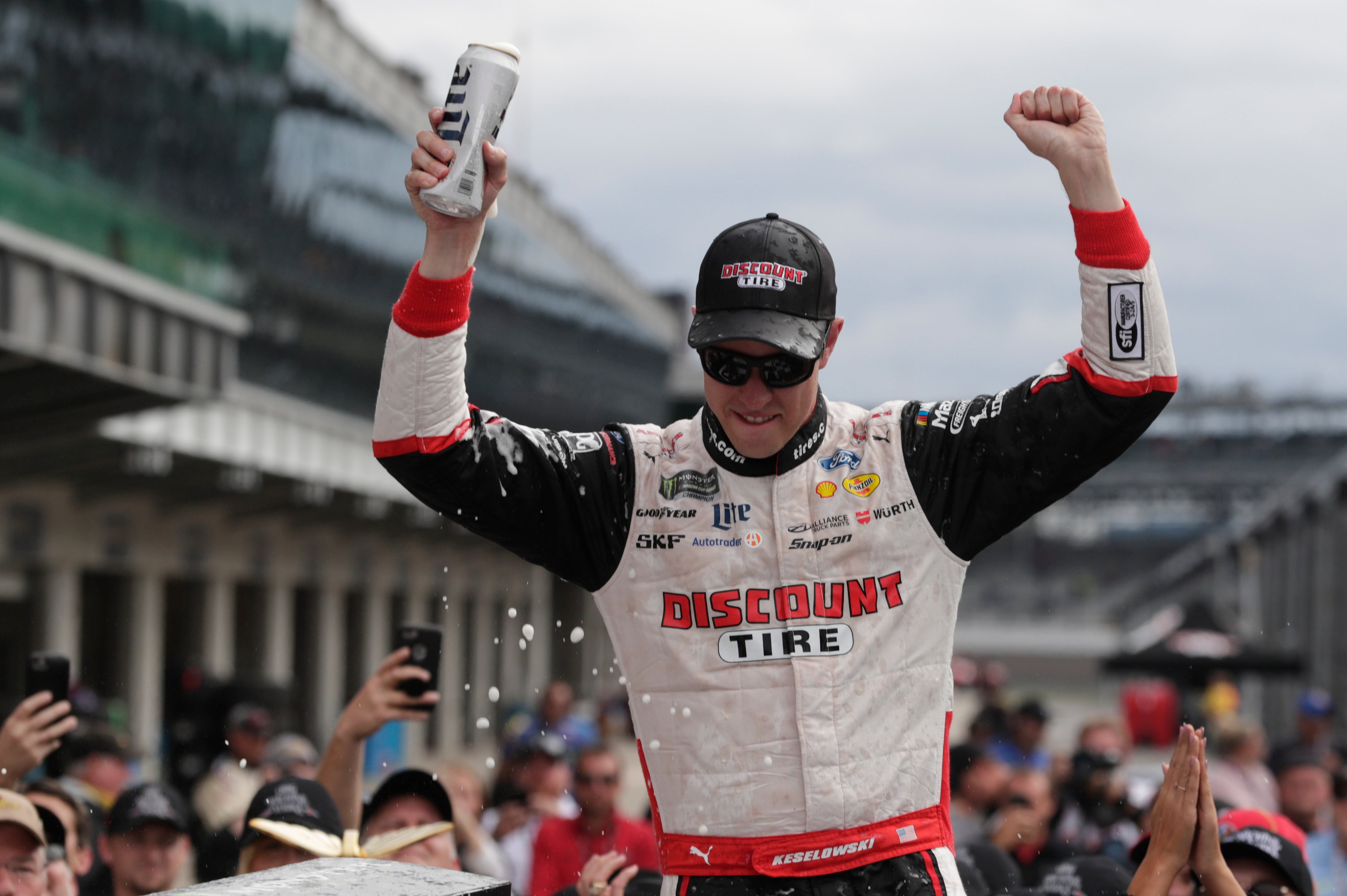 INDIANAPOLIS (AP) — First, Brad Keselowski figured out the secret to restarting at the Brickyard 400.

Then he safely and strategically bumped his way into the lead and sped to the finish line.

The 2010 Cup champion got past race leader Denny Hamlin on the second-to-last lap and beat Erik Jones to the finish line by 0.904 seconds. Hamlin finished third.

“Last year, I lost this race almost the exact same way. To bring it home this way, after messing up last year, is just incredible,” Keselowski said. “We were hoping this would be No. 500 and the Brickyard, but that’s all right.”

Penske certainly won’t be complaining about getting win No. 499 on the same historic 2.5-mile oval where he has won a record 17 Indianapolis 500 crowns.

His first win 25 Cup tries at his favorite racing venue came on one of the rare days he wasn’t actually attending in the pits for the rain-delayed race.

But Penske now joins Chip Ganassi as the only owners to win the Indy double in the same season. Will Power captured his first 500 win in May, while Dario Franchitti and Jamie McMurray both won at the Brickyard in 2010 for Ganassi.

The timing couldn’t be better for Keselowski. He heads into the first round of the playoffs with momentum following wins at the Southern 500 and the Brickyard.

And he earned this one the hard way.

He stayed close off the final restart with three laps to go, then quickly chased down Hamlin, running side by side with the race leader briefly on Lap 159. At one point, the cars touched but both drivers maintained control and Keselowski made the decisive move in the front straightaway just as the white flag started to come out.

Nobody got close again.

“Not having guys in the back wreck,” Hamlin said when asked what could have gone differently, referring to the late crash involving Landon Cassill and Jeffrey Earnhardt. “That allowed all the guys who take tires to come back up there at the end. It happens sometimes.”

Hamlin’s consolation prize will be joining Keselowski and Jones in the first round of the playoffs next week.

Fourteen drivers went into the race knowing they would compete for this year’s title and now they know how they stack up.

Kurt Busch clinched the regular-season title with an eighth-place finish in the No. 18 Toyota for Joe Gibbs Racing. His teammates, Jones and Hamlin, are seeded 10th and 13th.

Martin Truex Jr., of Furniture Row Racing, is seeded third even though exiting late in the first stage Monday.

Ford will have seven starters in the field, Chevrolet has five and Toyota has four.

Series officials and race organizers wanted the Brickyard moved out of the searing July heat in hopes of boost attendance with cooler temperatures around the track.

What they didn’t expect was three solid days of heavy rain, forcing a postponement of all track activity until Monday. No drivers got to practice or qualify before the racing doubleheader began Monday, and the crowd remained sparse for the rare weekday race.

Bowyer won the first stage Monday by 0.285 seconds over Kurt Busch. Hamlin finished third in that stage, which was marred two competition cautions and the crash that knocked Truex out of the race.

Matt Kenseth took the second stage when several drivers in the lead pack decided to pit before the third and final stage. Elliott finished second and Jones was third.

Keselowski also became the first Ford driver to win at Indy since Dale Jarrett in 1999.

The series shifts back west to Las Vegas, where the focus will be on the playoff.