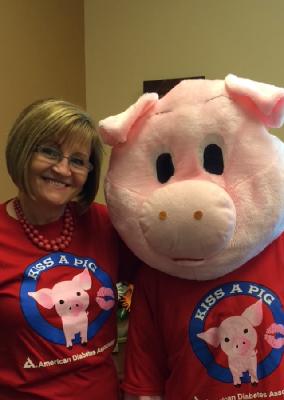 INDIANAPOLIS (WISH) – A local doctor is working to bring awareness to diabetes and highlight the role pigs play in diabetes care with the Kiss-A-Pig contest.

In early 20th century diabetes research, pigs were one of the first sources of insulin. According to the American Diabetes Association, since 1921, insulin has played a vital role in treating millions of people with diabetes.

Because of that, Dr. Ana Priscu, MD, a member of Franciscan Physician Network Diabetes & Endocrinology Specialists, created the Kiss-A-Pig contest to raise money and awareness for diabetes research.

“Diabetes has been at the center of my career for the last 20 years and it has been a tremendous journey,” said Dr. Priscu

Each dollar raised in the contest will count as a vote for a specific candidate to kiss a pig. The winning candidate gets the honor of kissing a pig during halftime at the Indiana Pacers vs. Miami Heat game on Sunday, Apr. 5 at Bankers Life Fieldhouse.