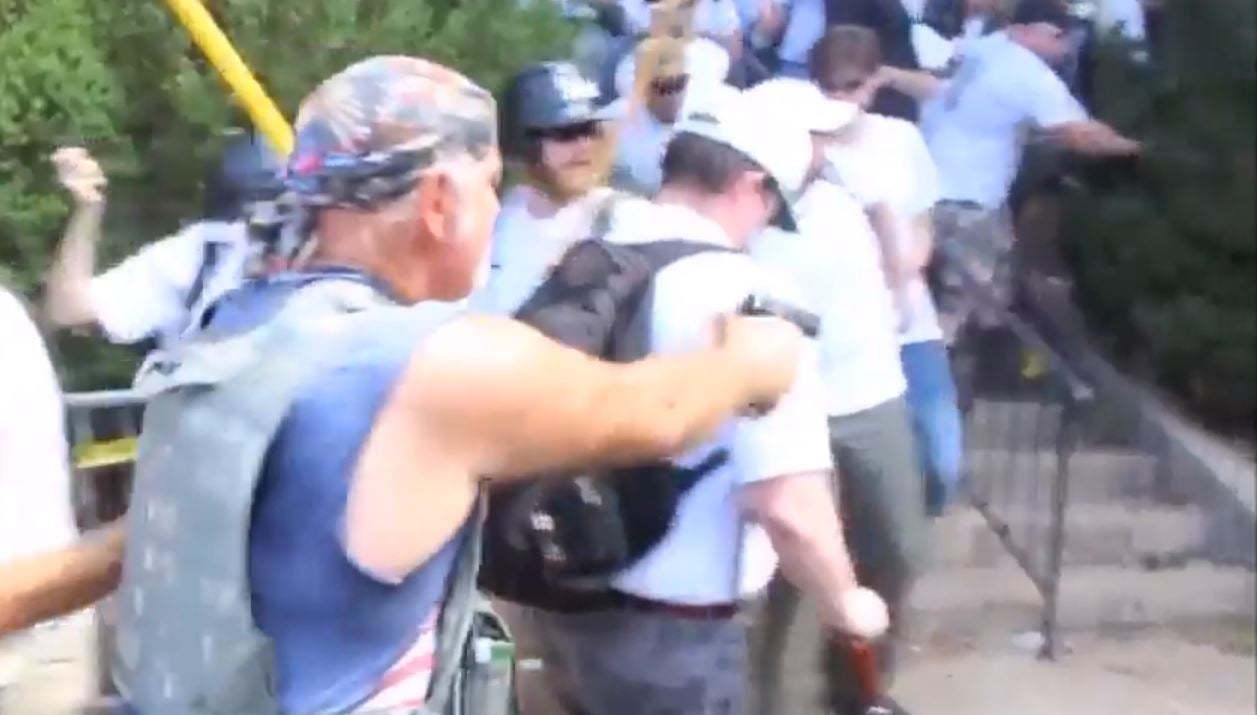 TOWSON, Md. (AP/WANE) – Ellen Drisgill said she was shocked when FBI agents came to her house and arrested her son, a KKK member who police say fired a gun during a recent white nationalist rally in Charlottesville, Virginia.

Drisgill said she didn’t even know her son had a gun. Plus, he was friendly with the black neighbors nearby.

“I’m very surprised about all of this,” she told The Associated Press outside her Baltimore home Monday.

Local authorities in Charlottesville recently charged her son, Richard Wilson Preston Jr., with discharging a firearm within 1,000 feet of a school during the rally Aug. 12.

The American Civil Liberties Union said it had provided law enforcement officials with a video of the shooting before Preston’s arrest. It shows a man yelling and firing a handgun one time while standing on a sidewalk crowded with rally goers and counterprotesters. No one was struck.

Preston, 52, told a judge on Monday that he wouldn’t fight extradition from his home city of Baltimore to Charlottesville.

It was hardly Preston’s first day in court or in the news.

WATCH: Man fired at another person in Charlottesville on Aug. 12. We handed ???? to LE agencies. The man has been arrested & charged w a crime. pic.twitter.com/0vrXq4zNC0– ACLU of Virginia (@ACLUVA) August 26, 2017

Preston faced several assault charges in the early 2000s, although he wasn’t convicted for any of them, according to court records in Maryland.

He also has spoken out publicly as an imperial wizard of the Ku Klux Klan. Mostly recently he spoke with WISH-TV’s sister station WANE in the days after Charlottesville’s deadly protests, blaming the city’s mayor for the unrest.

White nationalists had descended on Charlottesville in support of a Confederate monument that’s been targeted for removal. A woman was killed when a car smashed into counterprotesters, and two state troopers died when their helicopter crashed.

A 2013 article and video from the News Journal in Wilmington, Delaware, shows Preston in KKK garb calling for the impeachment of then-President Barack Obama.

Drisgill, Preston’s mother, said she didn’t know a lot about what her son did away from home.

“We’ve hardly ever sat and talked,” she said.

Kay Chapman, who lives across the street and is black, described Preston as neighborly and “very respectful.”

Chapman said she was stunned to see video of him at the rally.

“My heart dropped,” she said. “What happened to make him do that?”

Chapman said he had a Confederate flag sticker on his truck, but she didn’t think negatively about him for displaying it. She decribed him as “an all-around good guy.”

“He never offended me or my children,” she said.

She said she thought something “in the heat of the moment” must have set him off at the rally.

For Brandon Scott, a black city councilman who lives near Preston’s home, the video is proof that racism still exists and that counterprotests are necessary.

“It’s not surprising to me,” he said. “But for all of these folks saying people shouldn’t be protesting, this is the perfect example of why they should be.”

Scott said the next time people are criticized for protesting against white nationalists, he’ll send the ACLU’s video from Charlottesville. He’ll tell them “this person is in my neighborhood.”