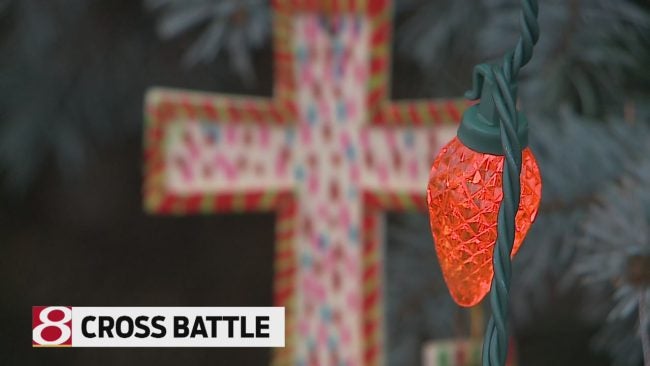 KNIGHTSTOWN, Ind. (WISH) – Residents in Knightstown are fired up after the town council removed a cross from the town’s Christmas tree.

The issue boiled over Monday morning after the town conceded a court case. Now residents in the area are fighting back.

It all started after one resident in town filed a lawsuit claiming his civil liberties were being infringed upon. That suit was then picked up by the ACLU.

Residents said they understood the man’s complaint, but say their fight isn’t over.

“Keep Christ in Christmas no matter where you’re at,” said Lora Lewman, who was at a rally at the town square Monday afternoon.

Residents were placing their own crosses on the tree. They were also handing out crosses to those walking by.

“We’re staying out here to protest and bring our cross back for Knightstown,” said Daylan Lloyd, another protester.

Earlier Monday, crews removed the cross from atop the tree. This came after the town council settled a lawsuit over the religious symbol.

In a statement, they wrote they regretted the decision and said:

It is with regret and sadness that the Knightstown Town Council has had the cross removed from the Christmas tree on the town square and is expected to approve a resolution at the next council meeting stating they will not return the cross to the tree. We could not win the court case brought by the ACLU. We would have been required to pay the legal fees of the ACLU lawyer and monetary damage to the plaintiff, Mr. Joseph Tompkins, as set by the Court. This is our statement based on advice from our legal counsel.

“We can put crosses in our yards, we can have creches in our yards,” said Ken Faulk, the legal director for ACLU- Indiana. “But obviously governments cannot do that. That’s why we have an Establishment Clause.

The suit was filed by ACLU-Indiana represented resident Joseph Tompkins.

“The cross is not a Christmas symbol. The cross is the preeminent symbol of Christianity and it reminds Christians not of the secular trappings of Christmas, but of the crucifixion and the resurrection of Jesus,” said Falk.

“God died for us and everything, and just one person can do all of this, to all of us,” said Dale Drake, while at the rally.

“If you can’t have Christ in your heart, I don’t know what you can have,” said Magee.

Another rally will be held Sunday at 1 p.m. at the town square.

Town council representatives were not available for comment, but a the matter will be addressed at a council meeting next week.