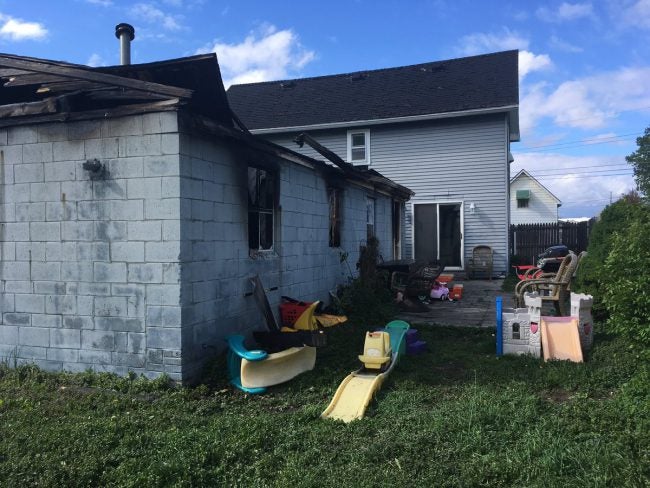 KOKOMO (WISH) — A Kokomo woman is calling a police officer her hero and crediting him with saving her 2-year-old daughter’s life.

She said an early morning garage fire could have turned into something much worse.

The fire happened around 2:00 a.m. Tuesday at a home on West Lordeman Street in Kokomo.

The garage is just feet away from the home. It was destroyed in the fire and the roof collapsed, all while a woman and toddler slept inside the home.

“I get a call saying my house was on fire and my 2-year-old daughter is inside. I just freaked out,” said Tiffany Brown.

She said her daughter, Avery, was at home asleep with a babysitter when the fire happened.

A Kokomo police officer on routine patrol noticed the smoke and jumped into action.

“He saw the garage up in flames and just ran in the house,” said Brown.

Brown said the house was full of smoke and there were no smoke detectors going off.

“He woke up my sister and said is there anyone else here? She said the baby is upstairs… he just ran up in there like King Kong and took care of business… he is our hero,” said Brown.

Kokomo Police have identified the officer as Sgt. Joe Culbertson. A spokesperson for the department said Sgt. Culbertson didn’t want any recognition and declined an interview.

“I owe him everything. I could have lost my whole wide world,” said Brown.

Brown said she can’t imagine what would have happened had he not noticed the flames, called for help and rushed inside the home to save her daughter.

According to a report from the Kokomo Fire Department, the garage was engulfed when firefighters arrived on scene. Damages are estimated to be around $25,000. Right now there’s no word on how this fire started.