Kyle Lowry shoved by fan after landing out of bounds 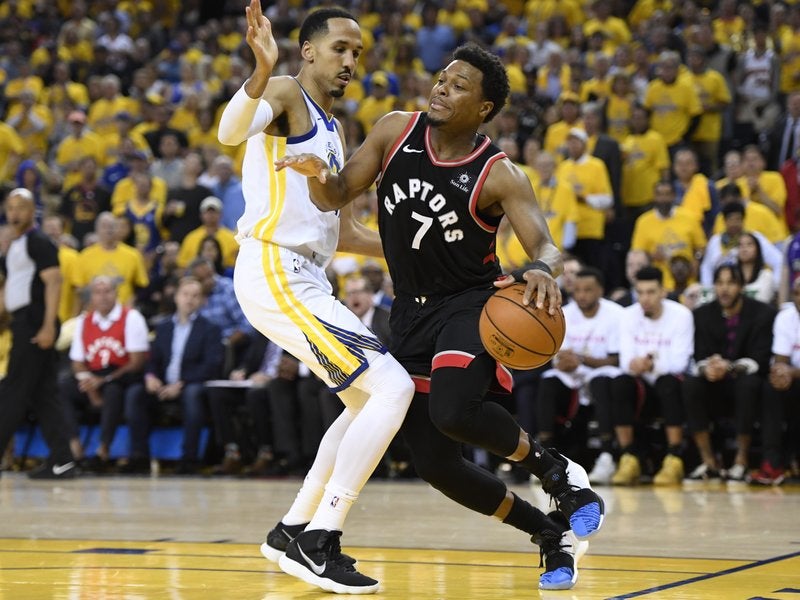 OAKLAND, Calif. (AP) — A fan seated courtside for Game 3 of the NBA Finals was ejected after shoving Kyle Lowry when the Toronto Raptors star crashed into a row of seats while trying to save a ball from going out of bounds on Wednesday night.

Lowry scored 23 points and made several big shots in a 123-109 victory that gave the Raptors a 2-1 lead over Golden State. There was as much buzz about Lowry’s dust-up with the fan as his offense.

Early in the fourth quarter Lowry ran down a loose ball and jumped in the air as it was going out of bounds, not far from where Warriors owner Joe Lacob was sitting. Lowry knocked the ball into a referee and landed in the lap of one male fan who appeared to grab Lowry’s jersey with two hands.

A female who was standing nearby patted the veteran guard on his back. At the same time, a man wearing a blue shirt who was sitting down extended his left arm and gave Lowry a hard shove in his left shoulder.

Lowry got up and complained to officials, although nothing further happened. He told The Associated Press the fan repeatedly cursed at him and said he had spoken to the NBA about the incident before leaving the arena.

Warriors spokesman Raymond Ridder and security officials confirmed the fan who shoved Lowry was ejected and escorted from Oracle Arena.

“Hopefully he never comes back to an NBA game,” Lowry said.

Lowry said the incident was not like the high-profile one that involved Oklahoma City star Russell Westbrook in Utah during the regular season, when the Thunder guard said a fan made racist remarks.

“People who sit courtside, they might get in on the action,” Lowry said. “Don’t sit courtside if you don’t want somebody touching you.”

The incident overshadowed a breakout game for Lowry. He scored 15 points in the first half to get the Raptors going and finished 8 of 16 from the floor with five 3-pointers. Lowry also had nine assists and four rebounds.

“He controls a lot of the pace for them,” said Warriors guard Stephen Curry, who had a career playoff-high 47 points. “He made shots tonight. Tip your cap to him. He was willing to take them. Historically when he plays well in the playoffs they usually go.”