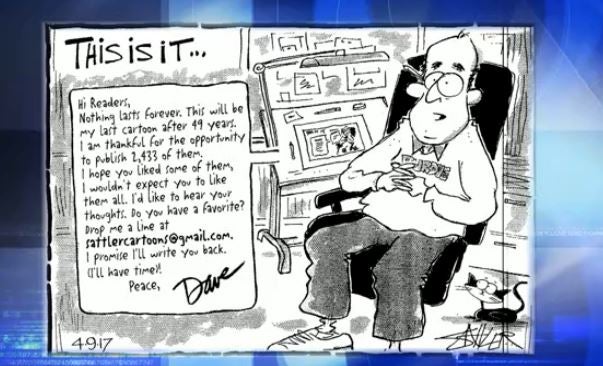 LAFAYETTE, Ind. (WLFI) – After 49 years, readers will no longer see Dave Sattler’s cartoons in the Lafayette Journal and Courier.

Sattler was recently let go from the local paper due to a format change, but his work will live on for years to come.

The first time Sattler ever picked up a pen for the Journal and Courier was when he was just 20 years old.

“You know, I’ve had no training at all. I never went to art school,” Sattler said.

His ability to capture the minds and hearts of the community with his cartoons was unparalleled.

“He just had a knack for bringing the humor out,” said reader Edward Kennedy.

Tippecanoe County Clerk Christa Coffey made it a point each week to look for Sattler’s work in Sunday’s paper.

“I love that one,” said Coffey. “He was able to take a tongue and cheek look at some serious issues sometimes.”

Other times, he wasn’t as playful with those hard-hitting topics. Like the one he did on Father’s Day in 1999. He drew a funeral scene showing the significance of quality time with family.

“It was an important thing to know, you know? Get together with your dad before it’s too late,” said Sattler.

But what people will likely miss most is Sattler’s hyper-local touch: His work is like a Greater Lafayette history book. How else would we remember the flameless Feast of the Hunter’s Moon in 1999?

“Due to dry conditions, we’re cooking our roasted squirrel chowder on ye old microwave,” Sattler said as he read a comic out loud. “You know, cause they couldn’t have fires out there.”

Sattler’s farewell cartoon was never posted in the J&C for reasons unknown.

And although Sattler would like to know why, he is choosing to move on.

“I don’t want to be angry at anyone. I just want to go out in style,” he said.

Even though you won’t be seeing his work in the local paper, Sattler will never stop cartooning.

“It’s what I do. If nothing else, I’ll entertain grandkids with it,” he said.

Sattler would love to hear from you regarding his work over the years.

You can send him one of your favorites or maybe even tell him about one you didn’t like. He said all comments are welcome.

You can email him at SattlerCartoons@gmail.com.