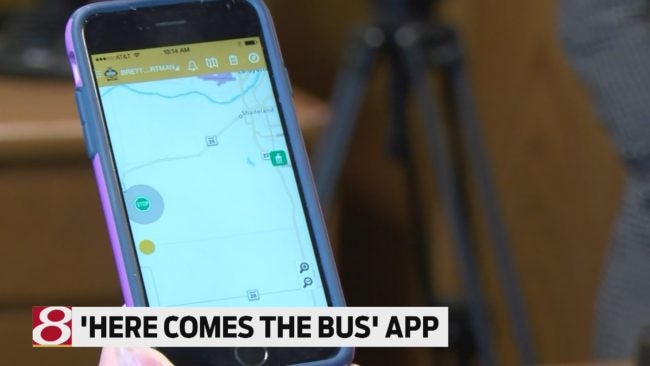 LAFAYETTE, Ind (WLFI) – The days of “I missed the bus” are over for half of the kids in the Tippecanoe School Corp.

That’s about how many of the district’s bus riders have downloaded the Here Comes The Bus application.

Before downloading the app, Cindy Maynard and her three kids would stress about whether they missed the bus.

“At that point, you end up having to call the school to see. Did we truly miss the bus? Or is it running behind?” Maynard said.

Sometimes her kids would miss the bus. To avoid it in the future, Maynard would send her kids out earlier than necessary. This made her feel guilty in the wintertime.

“The kids would stand out there freezing,” Maynard said. “And as a parent, you would worry about whether you sent them out too early and then, if you bring them back in, then it’s going to be them missing the bus.”

The district’s Transportation Director Greg Haltom said just under half of the students riding the bus use the app.

“If we had 100 percent that would be fantastic,” Haltom said.

He said the app’s notification feature is the quickest way to alert students and parents about anything that might pop up.

“Let them know, hey, your child is going to be about 15 minutes late due to your bus being stopped by a train,” Haltom said.

Maynard said, “I don’t see any reason why anyone wouldn’t want to have this app.”She loves that it is free and gives her peace of mind.

“I think the school corporation and transportation department have really created a safety feature for our kids,” Maynard said. “And some comfort for us as parents.”

Haltom said like most technology, it isn’t free of glitches. He said the corporation plans to improve and add to the app in the future.