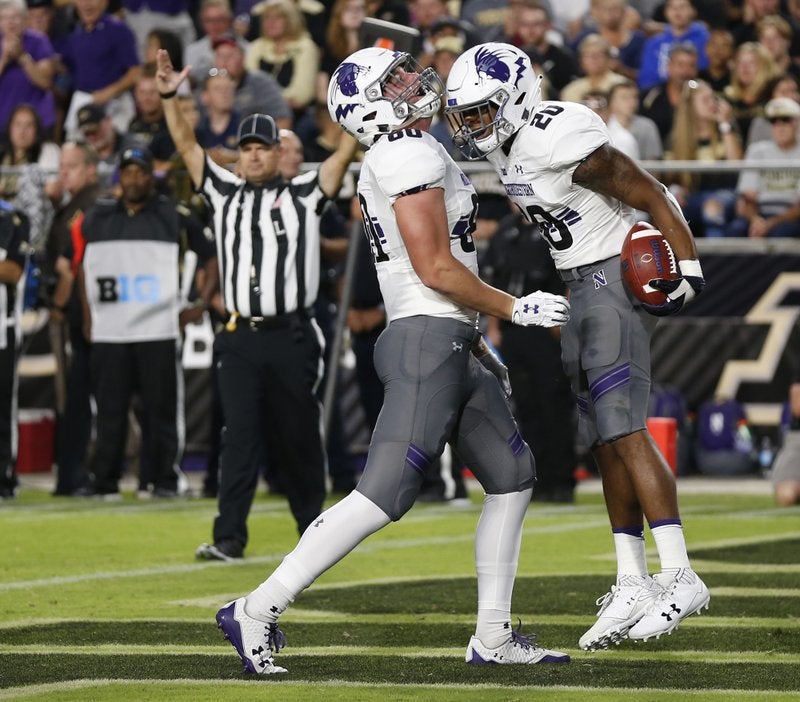 In his first game as the Wildcats’ feature back, the sophomore carried 26 times for a career-high 143 yards, scored two touchdowns and helped close out a season-opening 31-27 victory at Purdue with a final drive that consumed more than 7½ minutes.

“I thought he (Larkin) managed the end of the game,” Northwestern coach Pat Fitzgerald said. “All the little things, goes down and keeps the clock running. All those seconds count. That’s a veteran guy even though he’s still young.”

It was a much needed change in direction for Northwestern, which opened last season 2-3.

Since then, it has won nine straight overall and nine straight over Big Ten foes — the Wildcats’ longest streaks since their 1995 Rose Bowl. And, for now, they still have the longest winning streak among Power Five schools.

The game also marked the return of quarterback Clayton Thorson, who tore the anterior cruciate ligament in his right knee in December. Team doctors advised Fitzgerald to play Thorson and backup TJ Green played in a rotation and both played solid.

Thorson wound up 16 of 26 with 172 yards passing in his 40th consecutive start but must to wait at least one more week to break a tie with Brett Basanez and Len Williams to become the school’s career leader in TD passes.

For Purdue, it was frustrating.

Elijah Sindelar was benched after throwing three interceptions in the first half — each leading to a touchdown. He wound up 18 of 30 with 196 yards and connected with freshman Rondale Moore on a 32-yard score late in the first quarter.

“We can take a sack, it’s not a complete killer but we just tossed it to the other team too many times and that’s disappointing,” Purdue coach Jeff Brohm said. “I know he (Sindelar) is disappointed. It will get better.”

Moore had a huge college debut, catching 11 passes for 109 yards, running two times for 79 yards including a nifty 76-yard run to tie the score at 14 and broke Otis Armstrong’s single-game record for all-purpose yards. Armstrong had 312 yards against Indiana in 1972. Moore had 302 at halftime and wound up with 313.

The difference, as usual, was turnovers.

After Moore tied the score, Northwestern kicker Charlie Kuhbander made it 17-14 with a 34-yard field goal.

Sindelar was picked off two more times before halftime and the Wildcats cashed in with Green’s TD plunge and Larkin’s 4-yard scoring run to make it 31-17 at halftime.

Things slowed down in the second half after D.J. Knox broke free for a 45-yard run on Purdue’s first play. Knox made it 31-24 with a 2-yard TD run and Evans made a 27-yard field goal just 4 seconds into the fourth quarter.

But Thorson and Larkin played keep away for the final 7:57, closing it out after Purdue’s Lorenzo Neal was called for a personal foul on third-and-11 with 2:31 to go and the Boilermakers out of timeouts.

“He did an awesome job,” Thorson said, referring to Larkin. “It’s a credit to how he worked in the offseason and we’ll be behind him all season.”

Northwestern: The Wildcats needed a change after slow starts the past two seasons. This key road win could help them challenge for the Big Ten West crown.

Purdue: The Boilermakers made too many mistakes in the first half and couldn’t get the ball back despite some late chances. Sindelar was benched in favor David Blough, who nearly led Purdue back.

Northwestern: Receiver Bennett Skowronek and safety Jared McGee both left in the first half but returned later. Defensive tackle Alex Miller limped off in the third quarter with what appeared to be a left leg injury.

Purdue: Cornerback Simeon Smiley left on a golf cart after a helmet-to-helmet collision with one of his teammates late in the first half. He had a cut over his left eye and did not return.

Northwestern: “To see Clayton come back after that type of injury and be back for the opener, I think, is nothing short of just absolutely inspiring,” Fitzgerald said.

Northwestern: Plays Duke in its home opener on Sept. 8.