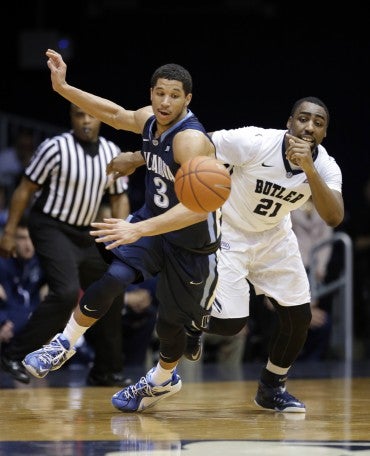 INDIANAPOLIS (AP) – Darrun Hilliard rallied No. 6 Villanova in the second half and hit a 3-pointer with 1.5 seconds left Saturday to give the Wildcats a 68-65 victory over No. 18 Butler.

The Bulldogs could have forced overtime, but Kelan Martin’s 3 from the left wing came up short at the buzzer.

Hilliard finished with a career-high 31 points, 20 in the second half when he knocked down five 3-pointers. JayVaughn Pinkston added 12 as Villanova (23-2, 10-2 Big East) won its sixth in a row.

Hilliard answered with three free throws with 1:24 left to make it 65-63 and, after Roosevelt Jones tied the score on an acrobatic layup with 17.3 seconds left, Hilliard made the last of his 3s.