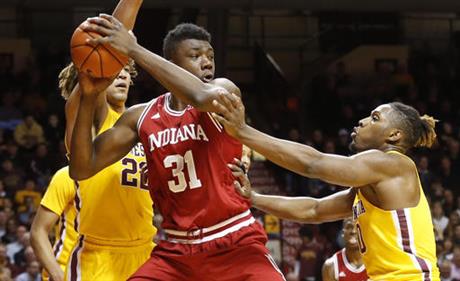 MINNEAPOLIS (AP) – Akeem Springs followed his own missed 3-pointer with a putback flip from the baseline with 3 seconds left, lifting Minnesota to a 75-74 victory over Indiana on Wednesday night to hand the Hoosiers their fourth straight loss.

Springs finished just 2 for 13 from the field, but the fifth-year senior’s hustle after his contested heave from the corner helped give the Gophers (19-7, 7-6 Big Ten) their fourth consecutive victory after falling behind in the closing minutes. Nate Mason led the way with 30 points, including 11 of 12 free throws, and Jordan Murphy had his third straight double-double with 14 points and 15 rebounds.

James Blackmon Jr. finished with 22 points for the Hoosiers (15-12, 5-9) after totaling only 17 points over the last two games. After driving through the defense to the top of the key, Blackmon pulled up for a 3-point try at the buzzer that banged off the backboard.

Indiana, which has lost six of its last seven games, failed again to cut down on turnovers and get going from behind the arc. The conference’s best-shooting team went 26 for 74 (34.7 percent) from the floor.

Thomas Bryant, who was scoreless in the first half, finished with eight points and 10 rebounds. His two made free throws with 17 seconds remaining put the Hoosiers ahead after a layup by Mason with 39 seconds left gave the Gophers the edge.

Blackmon helped the Hoosiers stay poised, at least, and a 9-0 run midway through the second half capped by a three-point play by Juwan Morgan gave them a 51-49 lead they didn’t relinquish until a pair of free throws by Murphy put Minnesota back in front with 1:06 left.

Hoosiers coach Tom Crean levied a sharp critique of his team earlier this week, lamenting the “immaturity” of his junior guards Blackmon, Robert Johnson and Josh Newkirk in an analysis of the team’s turnover troubles. Injuries, once again, have compounded Indiana’s problems with the season-long absence of Collin Hartman and recent loss of O.G. Anunoby. Even if those two starters had healthy knees, though, the Hoosiers might still be struggling.

With the Hoosiers starting their final five-game stretch in conference play with four on the road, Crean kept Johnson and Morgan on the bench to begin and put freshmen De’Ron Davis and Devonte Green in the starting lineup for a 6-foot-10 tandem inside with Bryant and Davis.

That didn’t work so well. Davis fouled out in nine minutes of action, though he did come alive late and finish with 10 points.

The first half was the definition of the beleaguered state of the Hoosiers. Gophers coach Richard Pitino was slapped with a technical foul less than 2 minutes into the game, and soon after he had torn off his suit coat and tie. Minnesota missed its first seven shots from the floor and struggled to produce any smooth possessions, but Indiana never took advantage.

The Hoosiers led 22-12 past the 7-minute mark after Blackmon’s second 3-pointer, but they lost Lynch, who was doing a masterful job of hounding Bryant on the other end while avoiding foul trouble, inside a few times for quick layups. Then Mason heated up, Murphy confidently swished a rare 3-point attempt to give the Gophers the lead on their way to a 21-7 run to finish the half.

Indiana: Despite beating Kansas and North Carolina in November, both ranked No. 3 at the time, the Hoosiers are in real danger of missing the NCAA Tournament and even the consolation-prize NIT altogether.

Minnesota: Those five straight losses in January marked by late-game lapses are gradually becoming a distant memory for the maturing Gophers.

Indiana: The Hoosiers have the weekend off from the Big Ten grind before hitting the road again to play Iowa on Tuesday. Their final home game comes after that, on Feb. 25 against Northwestern.

Minnesota: The Gophers stay at home to face Michigan on Sunday, before a trip to Maryland on Feb. 22.