Lawmaker introduces program to help those detoxing from heroin, other opiates 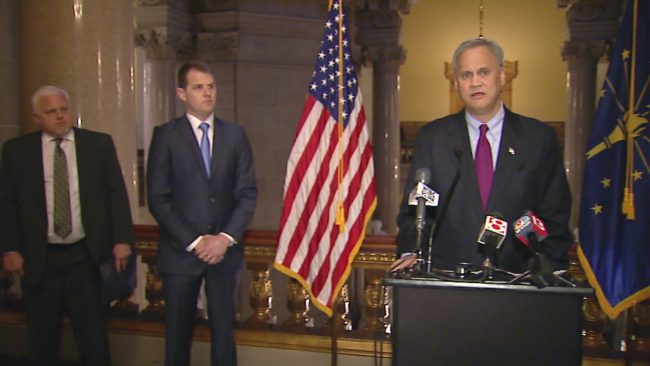 INDIANAPOLIS (WISH) — One lawmaker is promising to “kill” heroin abuse within the next five years. State Senator Jim Merritt introduced the Bridge Program Tuesday morning at the Statehouse.

At the core of the program is a device that helps those who are detoxing from opiates like heroin. For addicts, withdrawing can be the most difficult part of trying to come clean. The Bridge device would help lessen the physical pain of detoxing. The goal is that more addicts would be able to kick the habit. It’s an issue that’s personal for so many families, and one local prosecutor as well.

An ending is where this story begins. Leah McMillan was a high school athlete. She graduated from Indiana University; a beautiful woman with a bright future. But, Leah was battling addiction.

“(She) played softball, had several softball related injuries at some point in time and hurt her back. (She) got prescribed pain killing medication for her back injury and got hooked on it,” said Johnson County Prosecutor Brad Cooper.

As a prosecutor, it’s a story Cooper has heard countless times. But as Leah’s older brother, it was uncharted territory for him. Leah’s addiction lead to heroin use. At just 26 years old, she died of an overdose May 4, 2008.

“(I) followed them to the hospital where they pronounced her dead. My mother had to come in and identify her of all things…say goodbye to her, I guess,” Cooper recalled.

But Leah’s death was the start of something new; a different approach to the way in which Cooper attacks drug addiction in Johnson County.

During the news conference Cooper lent his support to the Bridge Program. Senator Merritt introduced it for the first time.

“It’s something that it’s time has come,” said Merritt. “I always say this is an illness. It’s not a character flaw. This is a healthcare problem. This is not a law enforcement problem.”

Through the program, addicts-especially heroin users, will receive a what’s called a Bridge, a device that medical professionals implant behind the ear. The device stays on for five days and makes withdrawing from opiates less painful and speeds up the process.

“The device, it targets cranial nerves that block part of the brain that fire these pain signals,” said Brian Carrico. Carrico is the Vice President of Sales for Innovative Health Solutions, the company that created the Bridge.

Although the Bridge is not brand new, the usage of the device in the criminal justice system is new. In fact, Greenwood Recovery Court will be the first in the country to offer it. Through recovery court, addicts will withdraw with the help of the device. Next they will be put on a drug called Vivitrol which blocks opiate receptors. If an addict were to use opiates, Vivitrol would prevent them from feeling high. But treatment doesn’t stop there.

“They go through a psychosocial treatment program usually lasting 16-26 weeks. That is where the real work is done to get the people away from the drug,” said Greenwood Recovery Court Judge Lewis Gregory.

Away from the drugs, with the help of the Bridge, it’s a device that so many families are hopeful will mark a new beginning for those battling addiction.

“A device that probably would’ve saved her life had it been around back then. Maybe it can save some other kids’ lives,” said Cooper.

If addicts get through the program successfully, Cooper says he would expunge any charges related to the drug addiction. For example, offenders wouldn’t face charges for drug possession, theft or driving on a suspended license.

The Bridge device costs about $500 plus around $150 for a medical professional. Greenwood Recovery Court has enough to fund the program for the next six months. In the meantime they’re looking for state or federal funding.

So far, according to Carrico, 20 other counties have expressed interest in the device, including Scott County. Last year, Scott County saw an HIV outbreak, mainly due to needle sharing.