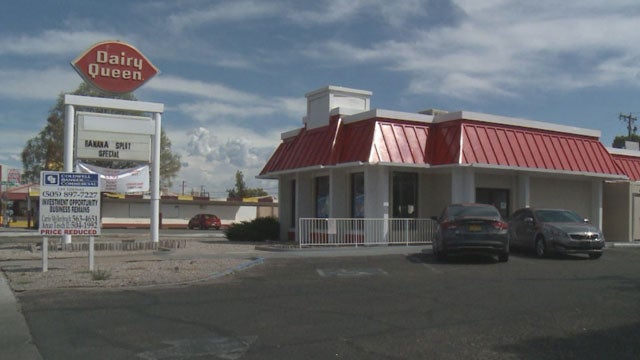 ALBUQUERQUE (KRQE) – A pregnant traveler’s craving for ice cream led her into a dangerous and unexpected situation.

It happened last month when Angelika Coakley-Vargas and her fiancee were driving from California to Illinois. The couple stopped in Albuquerque and made their way to the Dairy Queen near Central Avenue and Rio Grande Boulevard because Coakley-Vargas, three months pregnant at the time, had a craving for chocolate ice cream.

Coakley-Vargas ordered a Georgia Mud Slide Blizzard at the drive thru, but received what she called “some vanilla concoction [that] wasn’t even chocolate.” She sent her fiancee in to get it fixed. A couple of pumps of hot fudge wasn’t satisfying enough, so Coakley-Vargas entered the store herself.

“I asked them to remake the whole thing,” said Coakley-Vargas.

When the workers refused, Coakley-Vargas got frustrated.

“I just like slid the cup across the counter towards her and it tipped over onto the counter,” Coakley-Vargas said. “I walked out and as I’m walking out all I hear is, ‘You f****ing b****!'”

According to a police report, witnesses saw one of the workers, Takisha Archuleta, chase after Coakley-Vargas and attack her just outside the store. The report and Coakley-Vargas’ account differ slightly on whether a second employee tried to “pull Coakley-Vargas away” or join in the attack.

“I was just trying to protect my belly the whole time,” she added.

After the women were eventually separated, Coakley-Vargas ran back to her car and called police. Coakley-Vargas was taken to the hospital for treatment. While she was banged up, she says it appears the baby will be okay.

According to a police report, Archuleta told police she had only followed Coakley-Vargas to tell her she was no longer welcome in the business when Coakley-Vargas put her in a headlock. Witness accounts contradicted that and the officer wrote in his report that he would be issuing a criminal summons for Archuleta for battery.

The officer attempted to obtain surveillance video of what happened from the store, but as of two weeks later, was unsuccessful.

Court records show a prior Public Affray charge against Archuleta from 2011 that was dismissed by prosecutors.

Coakley-Vargas filed a lawsuit against the employees of the store, the store itself and Dairy Queen earlier this month.

Dairy Queen spokesperson Dean Peters said the fast food chain had yet to be served with the lawsuit and that it was company policy not to comment on pending litigation. Peters said he couldn’t say if the company had had any issues with this particular franchisee in the past.

WISH-TV’s sister station KRQE attempted to reach the owners of the store where the confrontation occurred at both the store’s location and by phone, but did not hear back in time for this story.