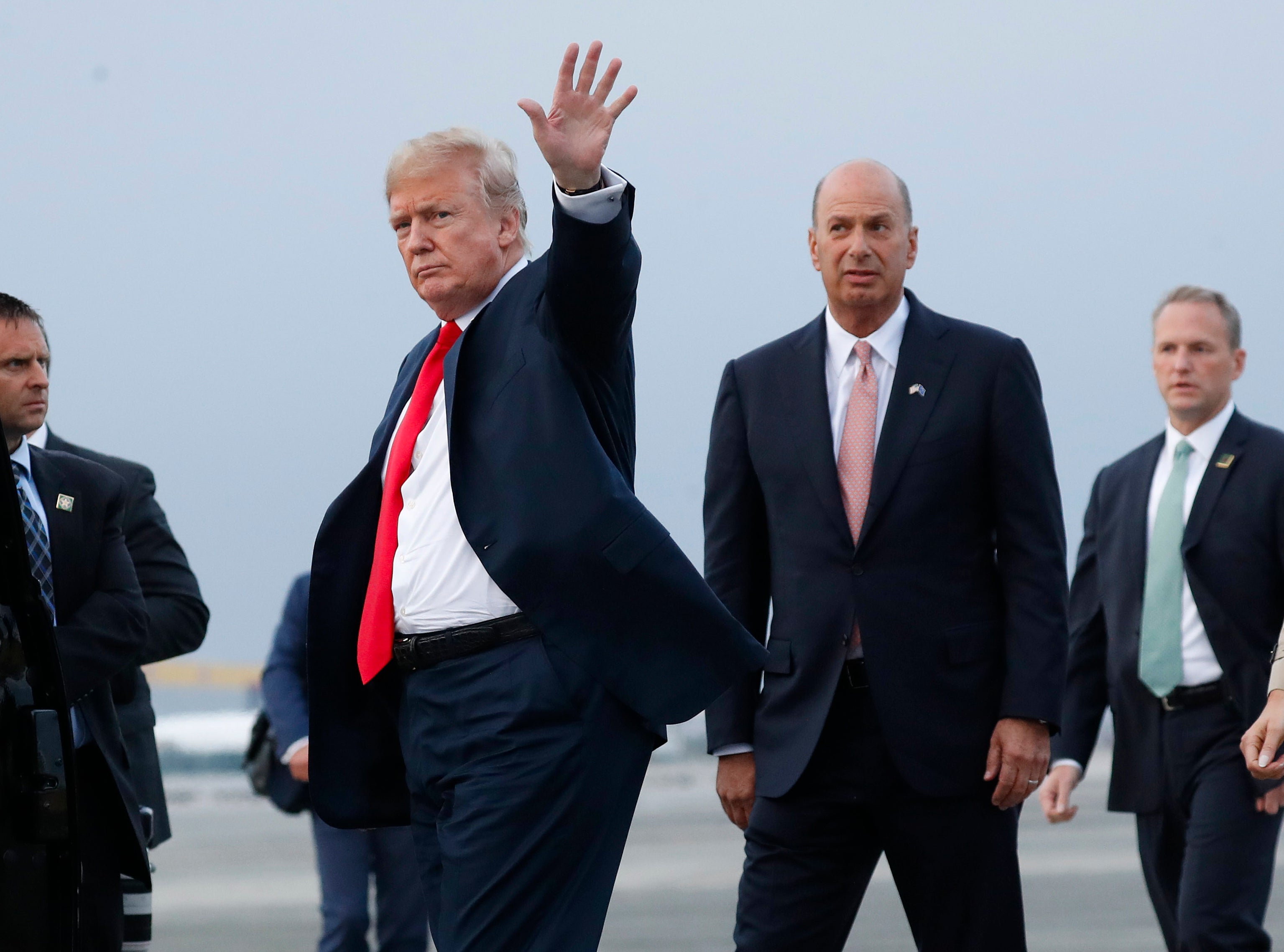 FILE - In this Tuesday, July 10, 2018, file photo, President Donald Trump is joined by Gordon Sondland, the U.S. ambassador to the European Union, second from right, as he arrives at Melsbroek Air Base, in Brussels, Belgium. According to text messages released the first week of October 2019 by House investigators, Ambassador Gordon Sondland and Kurt Volker, a former special envoy to Ukraine, discussed Trump wanting to press Ukrainian President Volodymyr Zelenskiy to investigate Trump's Democratic political rival Joe Biden and his family. The House Intelligence Committee is scheduled to meet in private with Sondland. (AP Photo/Pablo Martinez Monsivais, File)
by:
Posted: Oct 8, 2019 / 08:48 AM EST / Updated: Oct 8, 2019 / 02:19 PM EST

Democrats on the Senate Judiciary Committee are welcoming an invitation by the panel’s Republican chairman for President Donald Trump’s personal lawyer, Rudy Giuliani, to testify about corruption in Ukraine.

California Sen. Dianne Feinstein, the panel’s senior Democrat, said she wants to question Giuliani under oath about his role in seeking the Ukrainian government’s assistance to investigate one of the president’s political rivals.

She said Democrats “have plenty of questions for Mr. Giuliani and this would give us an opportunity to help separate fact from fiction for the American people.”

Graham, a Trump ally, said he wants testimony about the firing of a former Ukrainian prosecutor widely seen as corrupt.

Three Democratic House chairmen say they will issue a subpoena to U.S. European Union Ambassador Gordon Sondland after he didn’t show up for a deposition in the Democrats’ impeachment investigation.

The committees say the State Department told Sondland’s attorneys he could not testify. They say they’ll subpoena the ambassador for his testimony and communications on his personal devices that have not been turned over.

The Democrats are investigating Trump’s dealings with Ukraine. Sondland was involved as Trump urged the country to investigate political rival Joe Biden’s family and the 2016 election.

Trump has denied doing anything wrong.

The chairman of the Senate Judiciary Committee is inviting President Donald Trump’s personal lawyer, Rudy Giuliani, to testify about corruption in Ukraine.

The committee is led by Lindsey Graham. The South Carolina Republican is a top ally of Trump. Giuliani has also served as an emissary to Ukraine.

Trump is accused of seeking to strong-arm Ukraine into opening an investigation into Trump’s political rival, Joe Biden, and his son Hunter.

Graham said on Twitter that he wants testimony about the firing of a former Ukrainian prosecutor who was widely seen by the West as corrupt.

House Intelligence Committee Chairman Adam Schiff says the failure of a State Department official to show up at a deposition Tuesday as part of House Democrats’ impeachment investigation is “yet additional strong evidence” of obstruction of Congress.

Text messages released last week revealed conversations between Sondland and other U.S. diplomats who were intermediaries as Trump urged Ukraine to investigate political rival Joe Biden’s family and the 2016 election.

Schiff and other Democrats have said that they will consider such obstruction if they draft articles of impeachment against the president.

President Donald Trump says he’d “love” to send Ambassador Gordon Sondland to testify before Congress but doing so would put him before “a totally compromised kangaroo court.”

An attorney for Sondland says the State Department directed his client not to appear for a scheduled interview Tuesday before a joint House committee taking depositions in the impeachment probe of the Republican president.

Trump says in a tweet the “true facts are not allowed out for the public.”

Secretary of State Mike Pompeo (pahm-PAY’-oh) has ignored a shouted question about Sondland during a photo op with the visiting foreign minister of Estonia.

House Democrats are looking into Trump’s handling of U.S. relations with Ukraine and his desire for Ukraine to investigate potential Democratic presidential rival Joe Biden. Trump has denied doing anything wrong.

An attorney for Ambassador Gordon Sondland says the State Department has directed Sondland not to appear for his scheduled interview before a joint House committee taking depositions in the impeachment probe of President Donald Trump.

Sondland is wrapped up in the congressional impeachment inquiry and had previously agreed to appear voluntarily Tuesday to answer the committee’s questions in a closed session.

Sondland attorney Robert Luskin says that as the sitting U.S. ambassador to the European Union and an employee of the State Department, Sondland is required to follow the department’s direction. No reason for the direction was cited, he said.

Luskin says Sondland “is profoundly disappointed that he will not be able to testify.”

Luskin says Sondland “believes strongly that he acted at all times in the best interests of the United States.”

An envoy wrapped up in a congressional impeachment inquiry was a late convert to President Donald Trump, initially supporting another candidate in the Republican primary and once refusing to participate in a fundraiser on his behalf.

But Gordon Sondland nonetheless donated $1 million to Trump’s election effort and ultimately scored a plum post as U.S. ambassador to the European Union.

Now, a whistleblower’s complaint and text messages released by another envoy portray Sondland as a potentially important witness to allegations the Republican president sought to dig up dirt on rival Joe Biden in the name of foreign policy.

On Tuesday, Sondland is scheduled to head to Capitol Hill to face questions about the episode.

Until last week, Sondland was far better known in his home state of Washington than in the nation’s capital.