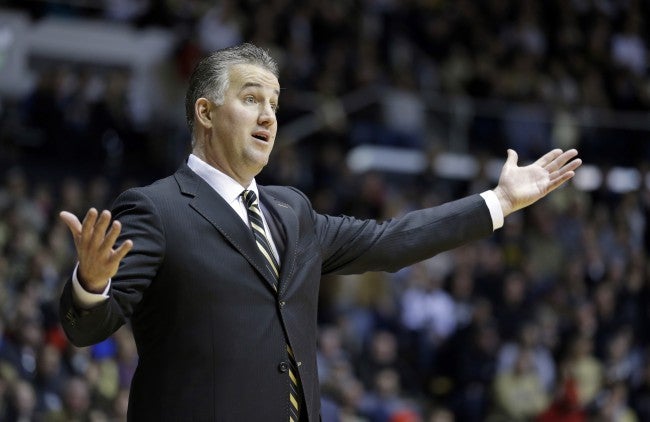 WEST LAFAYETTE, Ind. (AP) – Jake Layman and No. 11 Maryland got this job done with defense.

The Terrapins shut down Purdue and its big men, bouncing back from a loss earlier in the week for a 69-60 victory Saturday.

The Terrapins limited 7-footers Isaac Haas and A.J. Hammons to a combined 12 points and 13 rebounds. They shot a combined 4 of 11.

“They were very physical,” Layman said. “Really, they just crashed the boards hard, so every time they shot the ball, you had to focus on boxing out. It was a challenge, and in the second half, we did a good job with it.”

“We haven’t seen big guys like that. We know how good they are defensively. Coming off a loss and being on the road, this is something we had to have,” he said.

“I just thought we executed better. I thought we were more invested today than we were (Wednesday night), and it was good to see. I thought, defensively, we were dialed in most of the game. We played smart defensively,” he said.

Maryland won in its first visit to Mackey Arena.

The Boilermakers lost for the 13th straight time to a ranked opponent.

A trio of 3-pointers – two from Vince Edwards and one from PJ Thompson – had kept the Boilermakers close at 51-47 with 7:04 remaining. But foul trouble to centers Isaac Haas and A.J. Hammons prevented Purduefrom challenging Maryland at the rim.

For Purdue, which started 2-0 in the Big Ten, the loss capped a tough week in which it also lost at No. 4 Wisconsin.

Purdue junior Rapheal Davis said the foul trouble to Haas and Hammons limited the team’s chances of an upset.

“I think, more than anything, our bigs got themselves out of the game, going against principles and things like that,” said Davis, who finished with 12 points.

“Those offensive fouls, just silly things like that, they really did it to themselves. They just have to be more disciplined, when it comes down to it, and be more focused,” he said.

Maryland used 3-pointers from Trimble and Pack to take a 13-4 lead with 14:26 remaining in the first half.Purdue pulled even at 26 at the break.

The Boilermakers got a rare five-point play with 2:08 left in the half when freshman Haas was fouled while making a layup, and Maryland coach Mark Turgeon was called for a technical foul.

Stephens made the two technical foul free throws, and Haas sank his foul shot to push the Boilermakers into a brief 24-21 lead.

Maryland: The Terrapins entered the game leading the Big Ten in opponents field goal percentage at 36.9 … Trimble entered as the Big Ten’s second-best free throw shooter at 87.9 percent (109 of 124) … On Thursday, Turgeon added 6-foot-9 Ivan Bender, who played on the Croatian National team, to the roster. Bender is eligible immediately.

Purdue: Junior center A.J. Hammons entered as the Big Ten leader in blocked shots at 2.6 per game … Painter used the same starting lineup for a third consecutive game. … The Boilermakers were only 1 of 10 from 3-point range during the opening half.

While Purdue out rebounded Maryland 38-31, the Terrapins took much better care of the ball with only 10 turnovers while the Boilermakers were guilty of 16. Maryland scored 16 points as the result of mistakes. … Led by Pack’s 11, the Terrapins non-starters outscored the Boilermakers bench, 28-12 … Layman, Trimble and Wells were a collective 24 of 27 from the free throw line.

Maryland: Returns to College Park to play Rutgers on Wednesday.

Purdue: Travels to Penn State for a game next Saturday.