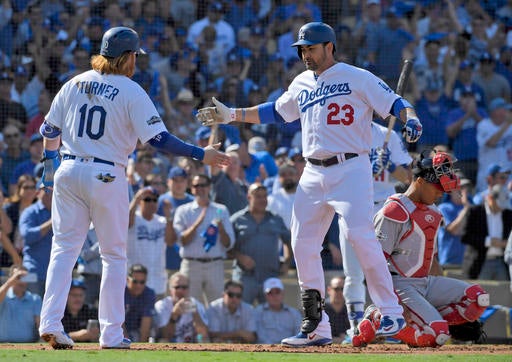 A look at what’s happening all around the majors Thursday:

In the only Division Series to go the distance, Washington hosts the Los Angeles Dodgers in a deciding Game 5at 8:08 p.m. EDT. The winner heads to Chicago for an NL Championship Series matchup with the Cubs. On the mound for the Nationals will be 20-game winner Max Scherzer. Dodgers manager Dave Roberts hadn’t announced his starting pitcher, but it was expected to be lefty Rich Hill. “I know (Clayton) Kershaw isn’t pitching,” Washington manager Dusty Baker said. “Thank God.”

The wild-card Blue Jays and AL Central champion Indians work out in Cleveland ahead of their AL Championship Series opener Friday night. Corey Kluber is scheduled to start Game 1 for Cleveland, followed by Trevor Bauer in Game 2 and Josh Tomlin in Game 3. Kluber tossed seven shutout innings of three-hit ball against the high-scoring Red Sox in his postseason debut last week. He’ll face Blue Jays right-hander Marco Estrada, who yielded one run over 8 1/3 innings to beat Texas in Game 1 of their Division Series.

No matter which team the Cubs play in the NL Championship Series, there will be some interesting connections. Washington manager Dusty Baker held the same job in Chicago when the Cubs collapsed five outs shy of the 2003 World Series. Not to mention, like the Cubs, the Nationals would be trying to end a long drought – the last team from the nation’s capital to win a pennant was the 1933 Washington Senators.

And if the Cubs wind up facing Los Angeles, there’s the relationship between Chicago manager Joe Maddon and Dodgers president of baseball operations Andrew Friedman, his old boss with Tampa Bay.

“They’re so balanced,” Giants manager Bruce Bochy said after his team was eliminated by the Cubs. “So whoever plays them has their work cut out.”

After finishing at the bottom of the NL West in their sixth straight losing season, the San Diego Padres (68-94) are making changes near the top. Mike Dee is out as team president , though managing partner Peter Seidler offered little insight into the move Wednesday. He denied Dee was fired, but wouldn’t say whether Dee resigned or if it was a mutual decision. Seidler said Dee’s contract wasn’t set to expire until August 2018.

Copyright 2016 The Associated Press. All rights reserved. This material may not be published, broadcast, rewritten or redistributed.