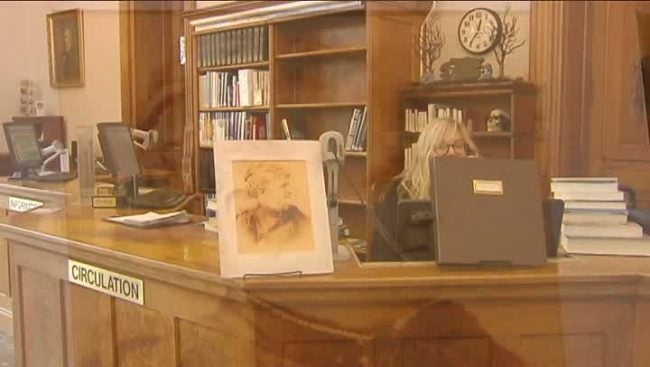 EVANSVILLE, Ind. (WEHT) — What many believe to be one of the world’s most haunted libraries lies at the heart of downtown Evansville.

The Willard Library has been recognized nationally for its famous “Grey Lady.”

24-Hour News 8’s sister station WEHT stopped by the library to see if they could catch a glimpse of the mysterious visitor as Halloween is just a week away.

“When he passed away, he left most his money to the library and not his family, which didn’t go over very well,” said adult services librarian Arrika Dedmond.

So, his daughter Louise sued the library but lost, which is why many believe she is still lingering around today, known as the Grey Lady.

“We call her a poltergeist because she likes to make herself known. She likes to move things around,” said Dedmond.

People say she appears as a dark apparition, clothed in a long gray dress with a veil.

In the 1930s, a janitor claimed he saw her repeatedly in a basement hallway, but no one believed him. To this day, the sightings haven’t stopped.

Many staff members claim to have seen books randomly falling from shelves and even figures in security cameras.

In 2015, an employee saw a dark transparent figure on a security camera. When she looked closer, it looked back and then disappeared.

Cameras are set up on every floor, broadcast live online for people to see if they can catch a glimpse.

“We get about 40 million hits on those cams a year, so there are a lot of ghost hunters out there.”

But the children’s story area seems to be her favorite spot.

“We’ve had multiple paranormal groups in here. They all say there’s something going on with the electromagnetic fluctuation in the story room.”

On Monday, it was silent. The staff said the Grey Lady only comes around occasionally, so her mystery continues.

If you want to try to see the Grey Lady for yourself, the library is offering their last set of haunted tours this Thursday through Saturday.

Information can be found here.

Ghost cameras can be found here.