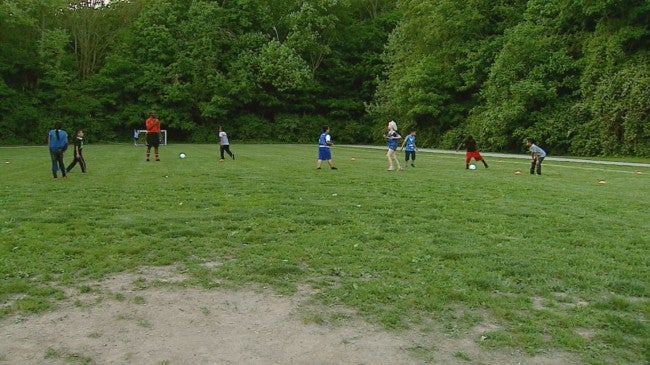 INDIANAPOLIS (WISH) — For families who live in low-income areas, there can be a lot of obstacles between their students and a good education.

But in Washington Township there’s a new approach to addressing those issues, and it didn’t come from the school or the city, but from private citizens wanting to make a difference.

A game of soccer at Fox Hill Elementary School is about a lot more than the final score.

“I had a ton of fun because I learned a lot about how to dribble and to stop the ball,” said Peter Cohen.

It’s just one part of a web being woven to support children living at or near the poverty level in Washington Township. The idea came from one man’s love of tutoring.

“I came to realize the barriers that some of these families face day after day,” said Tom Lange, “I just wanted to pitch in.”

So Lange, an Eli Lilly executive for 34 years, started kicking around ideas.

What if he took tutoring, soccer, and enrichment more directly into areas where there’s a high concentration of people in need? An environment where things like transportation and cost may limit what kids get to do?

Charte Parker has a son in the program.

“It looks like its going to be really fun for them,” said Parker. “They need things to do during the summer and after school and extracurricular activities are really important.”

“The focus for the program became five apartment complexes adjacent to each other in the township, where 2,000 families are on free or reduced lunch.

Lange got the help of several non-profits and Butler University’s School of Education to form Lion Catcher. The priority is on learning. The name “Lion Catcher” is based on an Ethiopian proverb that says ‘when spider webs unite, they can tie up a lion.’

To the kids, it’s exercise and play.

“It was awesome. We had a professional player coaching us and we might become professionals, too, someday,” said Victor Maya.

“There’s also the lessons of discipline and respect for others, teamwork and all that stuff,” said Lange.

What’s also happening in these five communities is what Lange calls a delightful surprise. Juan Sazuate has kids participating in the program.

“Before it was a chunk of all Mexicans, a chunk of all African Americans,” said Sazuate. “Now they all play together. They all ride bikes together, play soccer together, and they’ll play all night together if you let them.”

The soccer program is run by Americas Football Club.