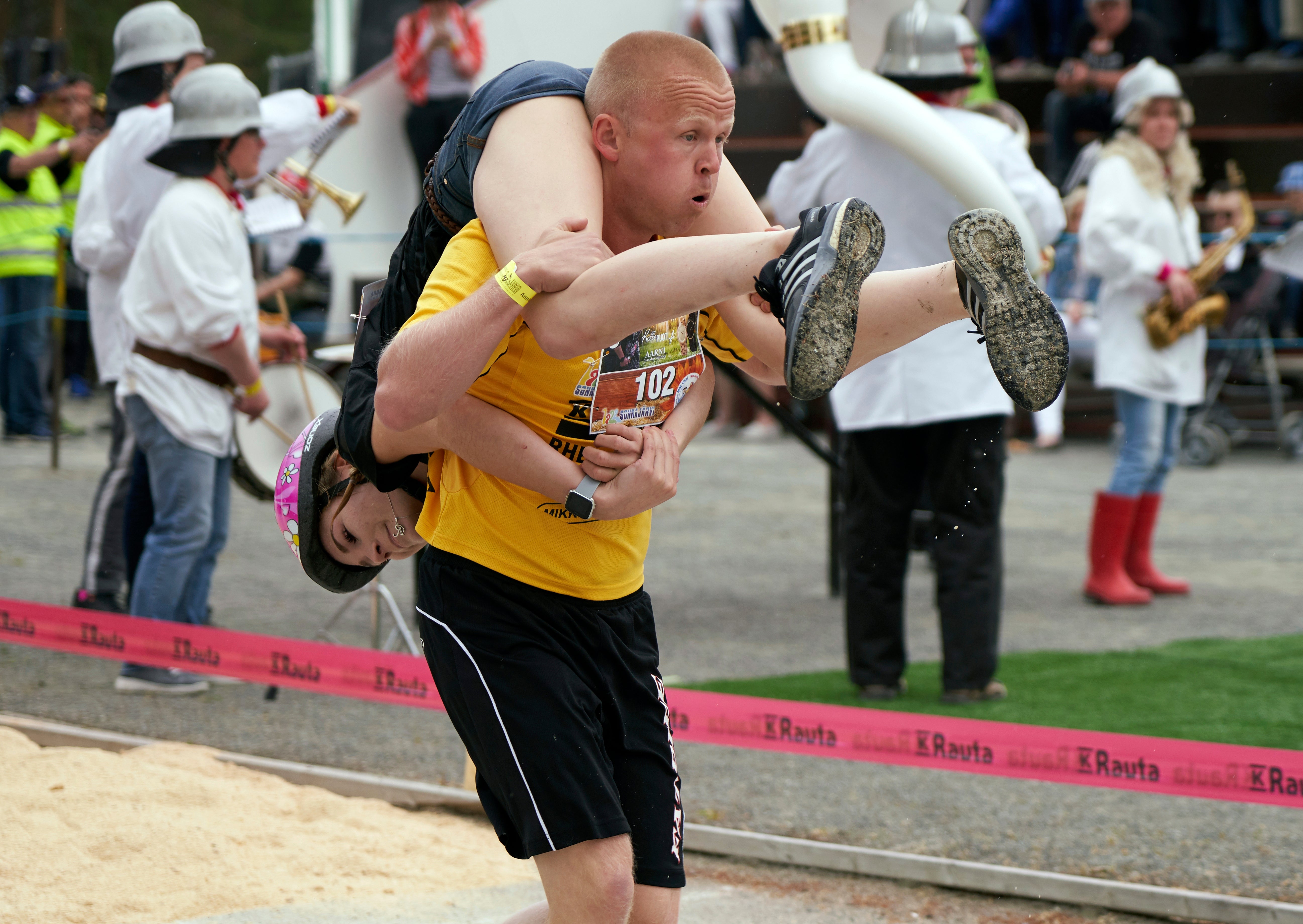 SONKAJARVI, Finland (AP) — A Lithuanian man and his wife have won the world ‘wife carrying’ title, leaping over timber and wading through waist-high water to beat dozens of other couples for a second year running. The prize is the wife’s weight in beer.

Vytautas Kirkliauskas and his wife Neringa Kirkliauskiene cleared a grueling 253.5 meter (278-yard) obstacle course in 1 minute 6.72 seconds Saturday. That was just a tenth of a second ahead of former six-time world champion, Finland’s Taisto Miettinen and his new partner Katja Kovanen.

“After the second obstacle I thought I wouldn’t make, but it’s a great result,” Kirkliauskas said, adding “my wife, she is the best.”

Couples from over a dozen countries, including Australia, France and Germany, took part in the annual race in the central Finnish municipality of Sonkajarvi, 300 miles (480 kilometers) north of Helsinki, the capital.

The rules stipulate that the woman must be over 17 years of age and weigh at least 49 kilograms (108 pounds). Despite the event’s name, couples don’t have to be married, and organizers say male contestants could “steal a neighbor’s wife” if they don’t have a female companion.

The event is inspired by a Finnish legend, “Ronkainen the Robber.” In the 19th century tale, a gang pillages villages and steals the women. The length of the obstacle course is said to be the distance needed to avoid being shot by pursuers.

Revived in 1992, the tradition now has men carry their teammate in various ways, though a popular method is for the woman to hang upside-down on the back on the male contestant with her legs around his shoulders.

The popularity of wife-carrying races has spread outside Finnish borders, with national competitions held in Australia, Poland, England and the United States. Even China has announced it will be organizing its first national edition in August with the winners traveling to Finland to compete in the world championships in 2020.

Finland has established itself as a prime venue for unusual events that include the air guitar world championship, swamp soccer and a new addition this year with a heavy metal knitting competition.

“It’s summertime and we just want to have some fun together,” said Eero Pitkanen, the competition’s founder. “It’s great to see our small town put on the map because of this.”

The rules stipulate that participants must have fun during the race, but that doesn’t stop them taking the race very seriously.

Along with the pride that comes from being crowned world champions, the couple also returns home with the wife’s weight in beer.

“The heavier the wife, the more beer for them,” said Pitkanen.