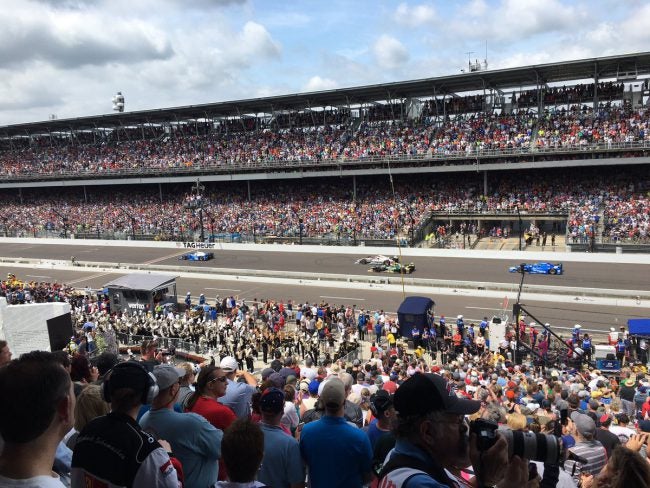 2:18 p.m. Castroneves pits from the lead on lap 104. Ryan Hunter-Reay takes over the top spot.

1:14 p.m. Jay Howard, checked, cleared, and released from the infield care center1:07 p.m. RED FLAG The race is brought under the red flag on lap 55 for track repair as well as fixing the safety fence following Scott Dixon’s hit. Both Dixon and Howard were able to get out of their cars and walk away.

1:05 p.m. Jay Howard made contact with the outside wall and came down the track, hitting Scott Dixon, who hits the inside wall in a huge hit

1:04 p.m. CAUTION: Crash involving pole-sitter Scott Dixon and Jay Howard brings out the first yellow of the day on lap 53

12:53 p.m. Fernando Alonso takes over the lead on lap 3712:51 p.m. After the first round of pit stops, defending champion Alexander Rossi leads on lap 35

12:50 p.m. Long pit stop for 2-time winner Juan Pablo Montoya pushes him back in the pack.

12:41 p.m. 20 laps in, all Team Ganassi so far as Tony Kanaan leads Scott Dixon. Rossi, Carpenter, Hildebrand round out the top-5.