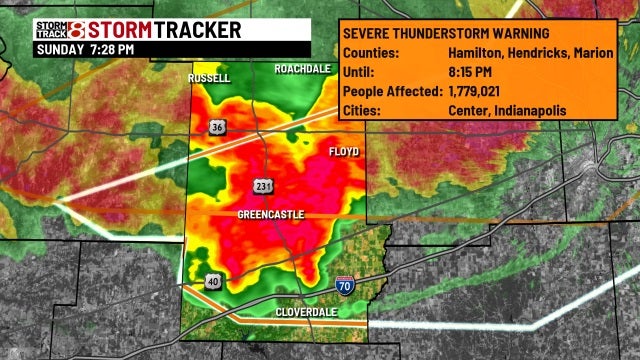 INDIANAPOLIS (WISH) — On Sunday, parts of central Indiana were under a severe thunderstorm warning, with a few communities reporting strong winds and hail.

A severe thunderstorm warning has been issued for Hancock, Henry, Johnson, Madison, Marion, Morgan, Rush and Shelby counties until 9 p.m.

Indiana State Fair officials said staff were not at the gates and were not accepting guests into the grounds. People already at the fair had been asked to seek shelter, the spokesperson said.

A severe thunderstorm warning was issued for Delaware, Henry and Randolph counties until 8:15 p.m.

The Indiana State Fair canceled its Sunday night concert from Mary Mary due to severe weather.

After evacuating the Ruoff Music Center, officials announced the planned Luke Bryan concert would be postponed until Oct. 11.

Are you seeing severe weather in your area? If so, send photos you take, from a safe place, to newsdesk@wishtv.com with your name, the location where the photo was taken and any other significant details.