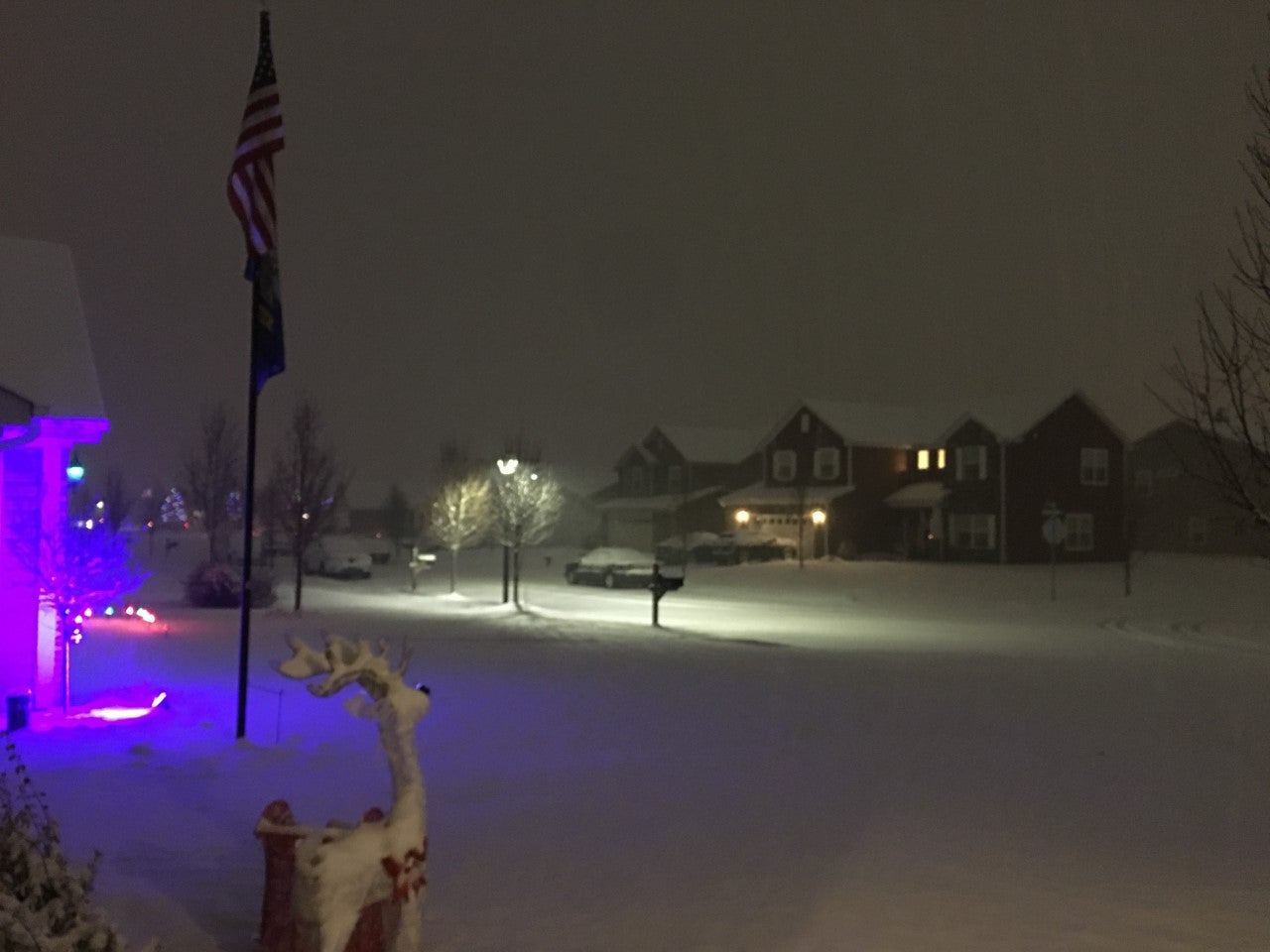 INDIANAPOLIS (WISH) — A winter weather advisory is in effect across central Indiana until Tuesday morning as snow heads into the area, making for possible slick roads and difficult driving conditions.

Send photos you take of winter weather to WISHWeatherpics@nexstar.tv, making sure to indicate where it was taken.

The National Weather Service Indianapolis tweeted the city set a new record for Dec. 15 snowfall with 3.9 inches measured at 10:55 p.m.

The Indianapolis Metropolitan Police Department responded to more than 200 crashes or slide-offs between 5:15 p.m. and 10:30 p.m., the department said by email. Here’s a breakdown of those incidents:

And the Indianapolis Department of Public Works said it would have a new crew of 80 drivers on the road to deal with snow overnight. Click here to check out the Indy SnowForce viewer, which shows where plows are working:

Sgt. John Perrine with ISP on Twitter said state police in the Indianapolis district had responded to 32 crashes (eight of those with injuries) and eight slide-offs since 6 p.m. Sunday.

At least a dozen school districts and several private schools reported they would be running on a two-hour delay for Monday morning. See all those closings here.

And News 8’s Sierra Hignite gave a look at road conditions around Indianapolis from our mobile newstracker:

Police in Danville were reporting multiple accidents and slide-offs and very poor road conditions. They asked drivers to stay off the roads, especially until U.S. 36 could be cleared.

Storm Track 8’s Meteorologist Tara Hastings answered your questions and discussed this round of snow and what’s next for central Indiana.

ISP Sgt. John Perrine in a video on Periscope said over a span of 1.5 hours, the Indianapolis ISP post received reports of more than two dozen crashes. He also asked people not to call into 911 or emergency centers to ask about road conditions and instead asked them to talk to INDOT.

And Storm Track 8 Chief Meteorologist shared this photo of her backyard:

Viewers shared these photos of snow where they live:

A travel watch means conditions are threatening to the safety of the public. only essential travel, such as to and from work and for emergency situations, is recommended.

Indianapolis Power & Light is reporting 2,291 customers without power, with the bulk of outages appearing in Franklin Township to the southeast.

Duke Energy is reporting 468 customers without power, with most of those reported in Sullivan County.

Fayette, Greene, Hamilton, Knox, Monroe, St. Joseph, Sullivan and Vigo counties were under a travel advisory, according to information collected by the Indiana Department of Homeland Security. IDHS updates this map with travel advisories, watches and warnings. An advisory is the lowest level and means that drivers should use caution and routine activity or travel may be restricted.

The Indiana Department of Transportation on Twitter said it had 55 trucks out in the Indianapolis area to salt and plow all night.

And Mayor Joe Hogsett tweeted that the city’s Department of Public Works had 80 vehicles out pre-treating roadways:

Indiana State Police Sgt. Stephen Wheeles tweeted out video showing snow on Interstate 65 in southern Bartholomew County. He also said that crashes were being reported and urged caution to anyone who needed to be on the roads.

The weather service also said thundersnow would be possible on Sunday evening: