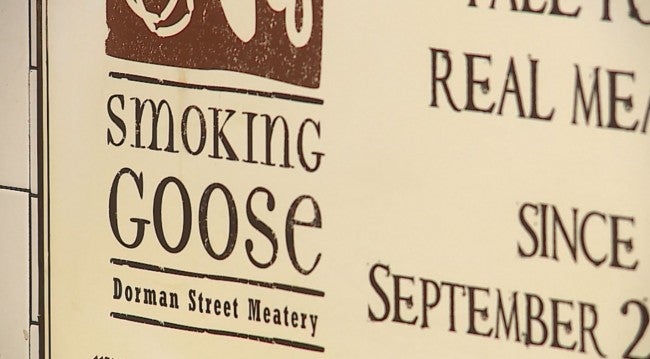 INDIANAPOLIS (WISH) — Real estate agents say the Holy Cross neighborhood is one of the fast-growing areas in Indianapolis. Some say the growth could be because of local businesses like the Smoking Goose.

People in the area tell 24-Hour News 8 the meatery is the heart of Holy Cross, and its success has been a driving factor in the neighborhood’s comeback.

When Chris Eley started his own meatery, he could’ve picked an industrial complex in the suburbs.

“There were all types of places that probably the buildings would have been new and great amenities — but we chose, we purposefully chose to stay downtown,” said Eley.

Eley chose warehouse that he said sat vacant for nearly a decade, in a forgotten neighborhood, right across the street from Flat 12 Bierworks.

Four years later, the businesses are two of the most popular in Indianapolis and the neighborhood is booming. Real estate agents can’t keep up with the demand.

“This area was really a nothing before these businesses came and it’s been great,” said real estate agent Mary Jo Showley.

We asked Eley to show us the secret to his success. He said the Smoking Goose does almost everything by hand. Workers smoke and age their meat in traditional “old-world” ways few others take on. Eley said no one else in Indiana uses the same process under federal inspection.

Workers flavor the meat with Indiana ingredients, giving it a taste you can’t find anywhere else. It’s why locals love it and places like Brooklyn, San Francisco and Austin can’t get enough of the Midwest meatery.

Eley said it’s happening all over historic neighborhoods in Indianapolis.

“We’ve gone from a city that’s only known for chain restaurants and big box stores.There’s so many things that are all coming together and creating a better culture for the city and really improving the city,” said Eley.

With Flat 12 across the street, and several other local businesses all within a mile, walkability has really become a selling point in this neighborhood.

Since opening in 2011, Eley said the Smoking Goose has doubled its production, it shops meat all over the United States and is even part of a meat subscription service based in Canada.