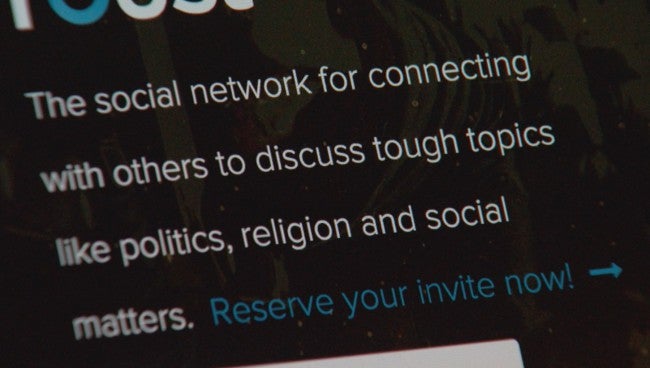 ZIONSVILLE, Ind. (WISH) — Log on to social media and it won’t take long to find friends or relatives who’ve posted something that can be, well, polarizing. You know, those comments about politics, religion, or controversial social issues.

Some love it. Some would rather not see it at all. And that gave Nathan Frampton an idea.

“I’ve always liked talking about politics and religion but the problem is there’s not really a good place to do it,” he said.

So the Zionsville businessman teamed up with local entrepreneur Mark LaFay to create Roust.

“Roust is a social network where people can connect with their friends to talk about controversial subject matter,” said LaFay. “Politics, religion, certain social issues, things like that.”

“We’ve talked with so many people that either want those conversations off of Facebook or they hold back on those coversations,” said Frampton.

Roust.Community is functionally similar to other social media sites. Users sign up, log in, and connect with friends and relatives.

“You can post long-form content, it could be 140 characters like a tweet, or it could be a blog,” explained LaFay. “You can agree with something, you could disagree, or you could just mark something as interesting.”

The site, still in the testing phase, is a work in progress. But both men say they’re confident in its success.

A 2012 survey by the Pew Research Center found 18 percent of social networking site users have blocked, unfriended, or hidden someone for reasons including posting too frequently about political subjects, posting something they disagreed with politically or found generally offensive.

On the other hand, 16 percent said they’d friended or followed someone because that person shared the user’s political view

“I just don’t think it’s the place to air your political views,” said Jeanne Anderson of Boone County, referring to Facebook. “I’d rather see your birthday party pictures than if you’re a democrat or a republican.”

LaFay said those interested in Roust.Community can sign up for an invitation. Invites will go out later this summer to continue to test the site and gauge interest.

“It’s not for everyone,” said Frampton about Roust. “But it’s enough to have an extremely viable product.”