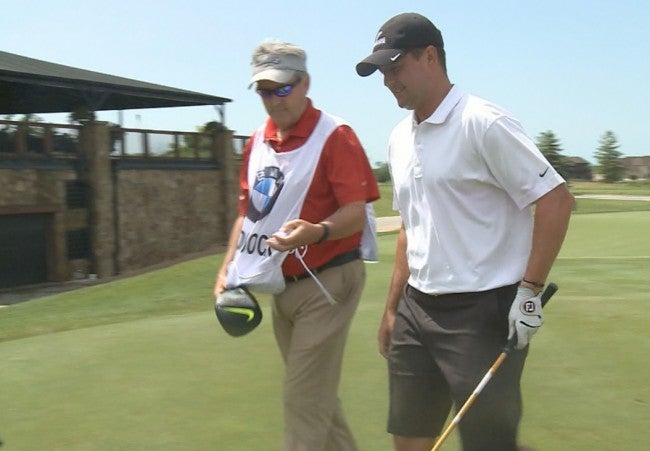 LAPEL, Ind. (WISH) — Father-son bonding happens on the course for amateur golfer Landon Paddock. Dad taught him the game from scratch, and his guidance and skill paid dividends.  The Lapel native played in high school and college and years later, never dreamed of playing an international competition 10,000 miles away.

“That’s just a once in a lifetime experience to play golf with people from Spain, Slovakia, Taiwan and everywhere all around the world,” said Landon.

This spring, Landon played in the BMW Golf Cup World Finals in Sydney, Australia.  Wins at a regional tournament in French Lick and the U.S. Finals at the legendary Pinehurst Country Club sent him on to the prestigious amateur golf tournament, where he competed against players from 45 different countries.

“(It’s) once in a lifetime because they literally tell you if you’re at the World Finals it’s the only time you can be there. Amazing trip, I don’t know when I will ever be in front of people from 44 different countries again. “

And dad came with him, not as his biggest fan, but his caddy once again.

“It was an awesome experience,” said his father, Dan. “I didn’t expect to caddy.  I figured they would get a local caddy, someone who had course knowledge  and when I was able to caddy, that was icing on the cake.”

“Having my dad as a caddy is one of those love/hate relationship type things,” said Landon. ” I’m 32-years-old, but we’re like brothers sometimes, where we’ll argue and compete.”

His goal: to make the weekend cut. He more than achieved that by finishing seventh in the world.

That once-in-a-lifetime opportunity has now paved way for another. He’ll play in the BMW Pro-Am with one of the world’s best golfers just days before this year’s BMW Championship in Chicago. He’s hoping to land Jordan Spieth as a partner.